"Elephants On The Move"

Get Updated When We Update

How It All Started

Us: “We’re going to change our lives dramatically.”

Us: “We are going to sell essentially everything we own, hop on a plane and travel the world.”

Us: “We don’t really have a time frame to return…”

This was the conversation that we had with both sets of parents a few months before we made the big move away from “home” and out into the world.

And these were easily the toughest conversations that we had.

In the summer of 2018, John was at a crossroads; we had recently moved for my job and he needed to find a way to make an income.  We had just gone through a nightmare of a rehab on a house that was supposed to be a homerun, that was not to be (a HUGE understatement) and steered John in a different direction for some way of contributing financially.  His brother had become a truck driver in the Chicago area and was making really good money; he suggested that John follow his lead and get his CDL license.  While financially this was probably a good idea, it didn’t fit with the family life that we wanted to have with our two children, aged 6 and 11 at the time. The second option was to pursue an income via an online business.  John had been doing a lot of research into possibilities and we debated between dropshipping and customer acquisition. In the end, we both decided that the best course for us and our family was to learn an online skill that would allow us to have the close family life that we so desired.

A short while later, one of the online gurus that John was following announced that he was offering a “mentorship” program for dropshipping.  It sounded amazing… a mentorship with no more than 10 people total, but with one catch: John would have to be in Thailand for ~3 months. And he needed to be there within the month.  With some trepidation, we decided that he should apply. He applied with only two days left on the deadline, not expecting to be accepted (there were only 10 spots available — and the process had been open for almost a month).  And we waited… to find out that he was accepted as one of the 10! What followed was a whirlwind of activities as he had to renew his passport and prepare to leave within the next 30 days.

It was during this preparatory time that the idea first occurred.  What if we decided to move to Thailand?? The entire family MOVE TO THAILAND??? WHAT???  ARE WE CRAZY??

At first, the thought seemed outlandish.  People with stable jobs don’t do such things.  Why would we give up stable income to move halfway around the world to live in a foreign country??

But the more we thought about it, the better it started to look.

In short, the more we thought about it, the more attractive it became.

All too quickly John left for Thailand while I stayed home with our two kids.  It was a very difficult time for all of us, as we are a very close family, used to eating dinner together every night, spending time watching a show, playing games, or even go grocery shopping together as a family — basically doing everything together.

John was learning a lot about dropshipping through his “mentorship” program, and more importantly, he was meeting so many people (“digital nomads”) in Chiang Mai, Thailand, that really opened up his eyes to possibilities.  Meanwhile, the kids and I were making due as best we could, looking forward each evening to the video call with John (the 12 hour time difference really made connecting more difficult!). Throughout this time, the idea of all of us traveling remained strong and the possibilities kept growing…

After being apart for two months we were all struggling.  It was Christmas time and we had never been apart during this time of year; our family was incomplete, even with the daily video calls.  In order to avoid feeling completely alone without John, the kids and I made plans to travel to Michigan to be with my family for Christmas.  While we were in Michigan, I was really going through a very tough time being apart from John and all I really wanted was for us to be back together again.  But I was very hesitant to say anything because I wanted John to be able to get as much out of this experience as he could. Then one evening, two days before Christmas, John asked me how I felt about him coming home early.  I was elated!! There was nothing that I wanted more than for us to be back together as a family! With some quick changing of flight plans, John was able to catch a flight out of Thailand on Christmas night and was able to meet us as we returned from Michigan just a few days later.  Our family was reunited and we all felt complete.

Hearing all of John’s stories and seeing his pictures just made my desire to travel stronger.  And yet, we weren’t quite ready to make that leap…

After much discussion, John and I decided that dropshipping just wasn’t the path that we were meant to be on at this time.  Although he had learned a lot regarding this avenue, the more we discussed it, the more it became apparent that it wasn’t the right fit for us.  With much research (and soul searching), we settled upon customer acquisition (helping businesses attract new customers/clients) as the right path for us.  With no formal training in this area, we decided to purchase an online course that would teach us the basics.  After tons of research, we ended up buying a FaceBook advertising course by Dino Gomez that was so much more than the basics! (Take a look HERE — if you think it might be a good fit for you, mention “John Yates” and we’ll get a little thank you).  We launched our business and John went to work to make it happen.

Shortly after John returned from Thailand, we decided to share with our then 12 year old son the potential of traveling the world.  At first, Trevor wasn’t totally sold on the idea. We had only moved 12 months before and he was still trying to find his place in a new school.  Now we were talking about uprooting him again?? But after realizing some of the benefits (you won’t be forced to write a summary of 3 kindergarten books for your English assignment (yes, an actual 7th grade English assignment!), we’ll be able to see all these amazing places around the world, experience the food and culture of so many places…) he began to really warm to the idea.  But we still weren’t 100% sure… this was going to be a HUGE change for all of us!

One of the factors that really helped to swing the pendulum towards “yes” was an amazing gathering of traveling families that John had found online while still in Thailand.  Each year, the Pearce family hosts a multi-day summit for families who travel the world, while working online and homeschooling their children. Suddenly, it wasn’t such a crazy idea — there were actually families out there who were doing this, and had been doing it for a decade or more.  We were sold on the Family Adventure Summit and wanted to be a part of it. The next summit was to be in October in Bali. In February, it became our goal to have that summit mark the starting point for our family journey.

Before we could buy tickets, though, we had to let our 6 year old daughter in on the plan.  We did some careful planting of ideas in her head, but we soon realized that we needn’t have worried; Brenna was sold on the idea as soon as she realized that I wouldn’t have to leave to go to work each day.  She was ready to leave now! (Do you have any idea how long 9 months is to a 6 year old??)

We purchased our tickets to the Family Summit in Bali (It was 100% refundable) and started planning.  And planning. And planning. Lists were made. And more lists were made.  And more lists. I’m what might be considered an obsessive organizer… But we still weren’t ready to tell our parents.  For obvious reasons, we felt like we really shouldn’t share that until we were ABSOLUTELY certain. And then we just kept putting it off.  By March, it was clear that the business was really taking off and we were certain that we would be leaving to be in Bali by October and it was time to tell the folks… 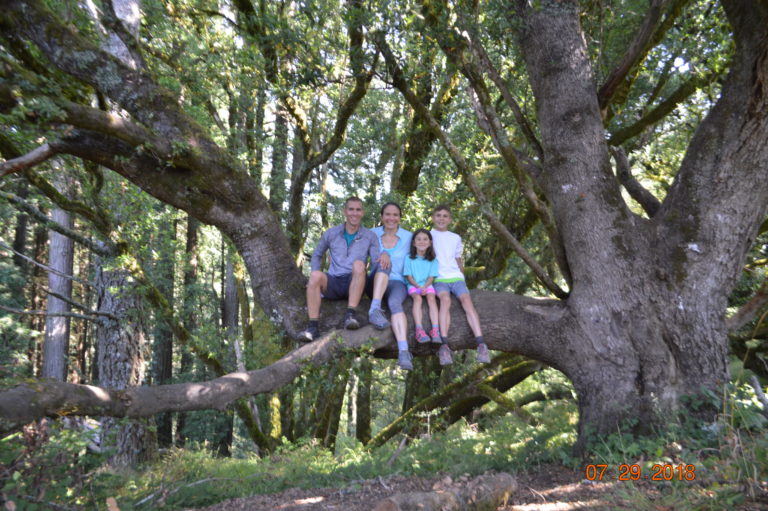 Then began more planning and waiting… yes, waiting for the right time to tell my employer and co-workers that I would be leaving.  Waiting to tell the kids teachers so that it wasn’t a distraction for them, and just plain waiting for the time to pass by. And planning, always planning: passports, immunizations, purchasing tickets, when to leave, where to stay once the lease was up, and more and more and more.  Oh, and always working on building our new business as well!

After several garage sales, selling all kinds of things through FaceBook Marketplace and TONS of donations to anyone who might be in need of what we had, we finally managed to get all of “our stuff” down to an amount that we could travel with.

One of the toughest times for all four of us was going through our “want” pile; each of us had placed non-essential items that we wanted to take with us into a large pile and the time came where we had to decide what would actually fit into our bags and what would not.  We made it through, although it felt like we were still going to be traveling with a ton of luggage! (Is it really bad to plan on traveling for an extended period — years, with visits back to the USA, of course — and have 1 suitcase, 2 large duffle bags, 2 large backpacks AND 4 carry-on bags??)  We managed to get through it though, and stored a few things — mostly sentimental — in a storage unit.

After many good-byes, it was finally time to start our journey.  We invite you to follow along with us as we travel and explore the world as a family.

Explore
The World With Us

Follow us on our journey around the world as we share our experiences, thoughts, and visual of what is happening in our life, and let it be an inspiration to yours.