Have you ever experienced a time when everything seemed to fall into place perfectly?

It was my birthday and we had already had a busy day. We had driven scooters to the amazing ruins of My Son in the Vietnam jungle that had been there for centuries and hiked around in the oppressive heat of the late morning. After downing a lot of cold water, we hopped back on the scooters for a very windy drive to Hoi An, a city along the coast of Vietnam reknowned for their French architecture and one of the few areas untouched by bombing during the Vietnam war. After a late lunch, we checked into our Airbnb (a special treat for one night!) and then dove into the ocean to cool off and relax.

It was getting late and we knew that we needed to eat some dinner, so we headed back into the heart of Hoi An and randomly found a place to park without having a true destination in mind. Surely we would be able to find a restaurant in this pedestrian-only area. A quick look at Google Maps had us heading towards the river where we were greeted by the beautiful sight of all kinds of hanging lanterns — along both sides of the river, on the bridges, as well as on the boats bobbing upon the river with tourists. 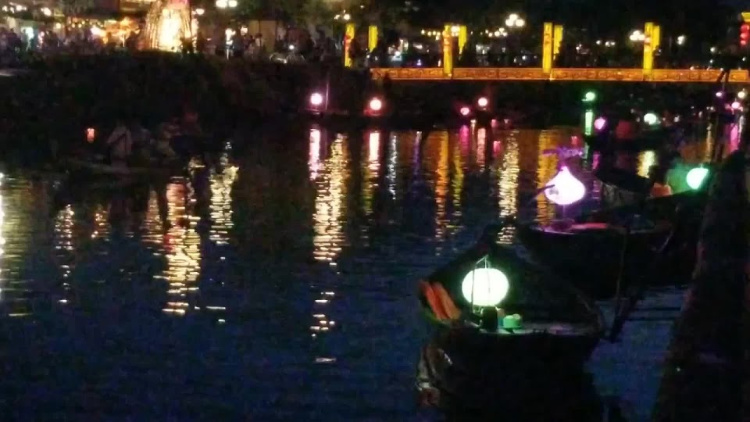 We found the restaurant that we had initially looked for, but upon perusing their menu found that it wasn’t really what we were looking for, even though it had a wonderful view of the entire river scene which was teaming with families and couples strolling and enjoying the cooler evening air.

John went back to Google Maps and selected another destination that was within walking distance. Not being extremely hungry after our late lunch (and not one who is really guided by food in general), I wasn’t too concerned about checking out his selection. So long as we could get there relatively quickly and they had food that we would eat, anything would be fine.

However, when he showed me the name, “The Secret Garden”, I was instantly intrigued. As a child, I LOVED the book by Frances Hodgson Burnett about the little orphan, Mary, who discovers a secret garden. Additionally, I have a true love of gardening (especially flowers) that has been passed down for generations. I was set to go.

Our phone was low on power, so we took a look at where we were headed and then off we went. The streets were teaming with people and being pedestrian-only, most of the shops had their wares displayed enticingly for tourists to browse. Restaurants, clothing stores, ice cream vendors — all had their doors open and inviting. Colorful lanterns were strung across the streets and a sense of happiness pervaded the entire area.

We had walked for a couple of minutes when Trevor and I suspected that we might have missed a turn, so turned the phone on again and found that, yes, we were supposed to walk down this narrow alley. Hmmm?? It was much narrower than the surrounding street. And it was dark. No lanterns, no street lights. The only light came from an open doorway of a small restaurant illuminating the trash bags littering the alley.

We proceeded forward with a little trepidation. All I could think of was, “where I grew up, they taught us to NEVER go down dark alleys” (for reference, I grew up just outside Detroit)! However, we kept going down this narrow passage and soon came to an intersection with a sign (lit by a very small light!) indicating that we had reached our intended destination.

Oh my! What a beautiful sight greeted us! Lush greenery all around: plants in pots, trees, fountains. A peaceful and calming environment enveloped us the moment we stepped in. The staff ushered us to a table — we were the only guests in the restaurant — and gave us menus to peruse and cool cloths to wipe our hands and faces with.

We placed our order and sat back to enjoy our surroundings. The babbling of the fountain was interwoven with the soft music that played unobtrusively from the speakers. The candlelight on the table flickered softly in the breeze created by discreetly placed fans. And the lush greenery was all around us.

Eventually I felt compelled to walk around and explore. Looking around, it was evident how much care had been taken when the restaurant was designed: there were full-grown trees which grew through strategically placed holes in the ceiling, two fountains were situated so that the soft tinkling of water could be heard by most diners, lovely flowers bloomed and the soft fragrance of a blooming tree sweetly perfumed the air with the scent of subtle hyacinths.

All of this combined to make Trevor comment that the ambiance of this restaurant was truly amazing. (Yes, I’ll admit a little bit of motherly pride with his choice of the word “ambiance”!)

And then our dinners arrived — all at the same time (a rarity in many Asian countries!) — and we were in for yet another treat. We had all ordered completely different meals: Trevor ordered catfish, Brenna a chicken leg in “aroma” sauce, John ordered pork ribs, and I had opted for a medley of spring rolls. 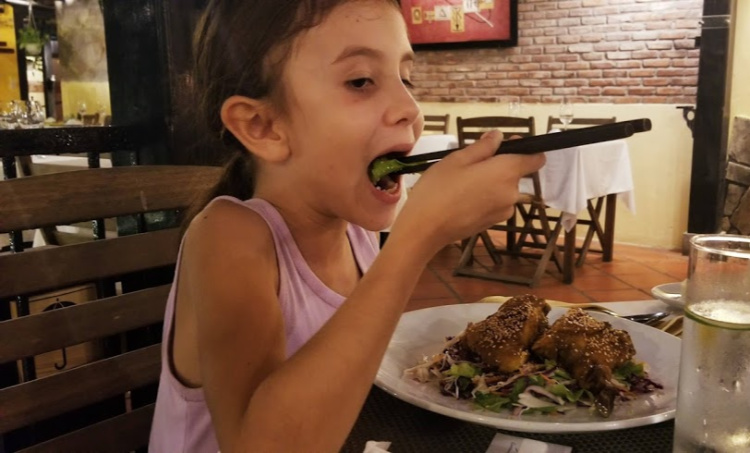 To start with, all of the plates were a feast for the eyes! Impeccably plated, each one was worthy of a photo spread in a food magazine. We were all extremely happy to discover that the meals tasted just as good as they looked and we all shared samples from each other’s plates.

We ate our delicious meals surrounded by the serene atmosphere of lush greenery and the quiet babbling of water, savoring the atmosphere as well as the food. At the end of our meal, we spoke with the head server who mentioned that this was the first day the restaurant had been open on a weeknight; they had only recently reopened and then only on weekends. The previously very busy restaurant had been struggling to get customers due to the lack of tourists. We felt privileged to have been able to enjoy it with no other diners present. 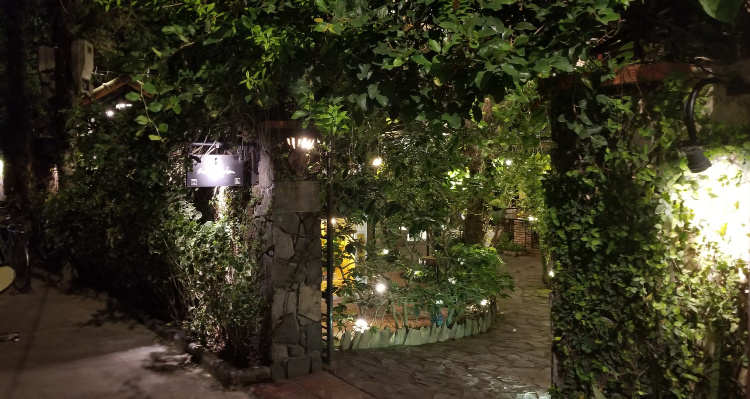 As our meals were finished and we were readying to leave, I took a moment to reflect upon all of the choices we had made that resulted in us dining at “The Secret Garden” this evening. So many random, unplanned decisions led us to this place. One year previously, we had still been in the USA, planning the start of our travels, never imagining that we would be in Vietnam (a country that neither John nor I had really ever considered visiting), creating incredible memories at the end of a dark alley in the middle of a secret garden. It was as if the stars had aligned to bring us to this place, at this moment in time, to provide us with this amazing experience.

I feel so blessed!