After unexpectedly having to get rid of our Jaguar and replace it with a rented minivan (see our previous post), we drove to a Walmart to transfer ALL of our belongings.  By this point, it was late – after 8 pm – and we had nowhere to sleep.  The plan (with the car working properly) was to head south prior to reaching Grand Junction and find a campsite within a National Forest.  Having gone all the way into Grand Junction, we were now faced with trying to find a campsite somewhere quickly.  A quick glance at Google maps showed that the Colorado National Monument was relatively close.  We had never heard of this National Monument, let alone planned to go there.  Tired, and heartsick at leaving our car in a Walmart parking lot for the night (with the intention of finding a way to get rid of it the following day), we headed to the Monument.  Arriving well after dark, we faced a looming dark rock in the road – one that we soon realized we would be driving up onto!

With some trepidation, we set out up the steep, winding road in the darkness.  After traveling several miles, we came to a pull off on the side of the road and got out to see if we could possibly set up 2 tents.  The answer quickly came back as a resounding, “No”.  Steep cliffs were only several steps away from the “scenic overlook” (which was incredibly black at the moment – with the exception of some city lights far below in the distance).  Back into the car.  What to do??  Turn around and go spend the night in Walmart parking lot?? Continue up this scary road in the dark with no idea where we might end up??  We opted for the latter and John bravely continued to drive up this twisting, winding road (although he and I were both more comfortable with him driving down the middle of the yellow line, rather than to the right of it!).  After a couple of more miles, we were both ready to turn around and sleep in the van at Walmart. 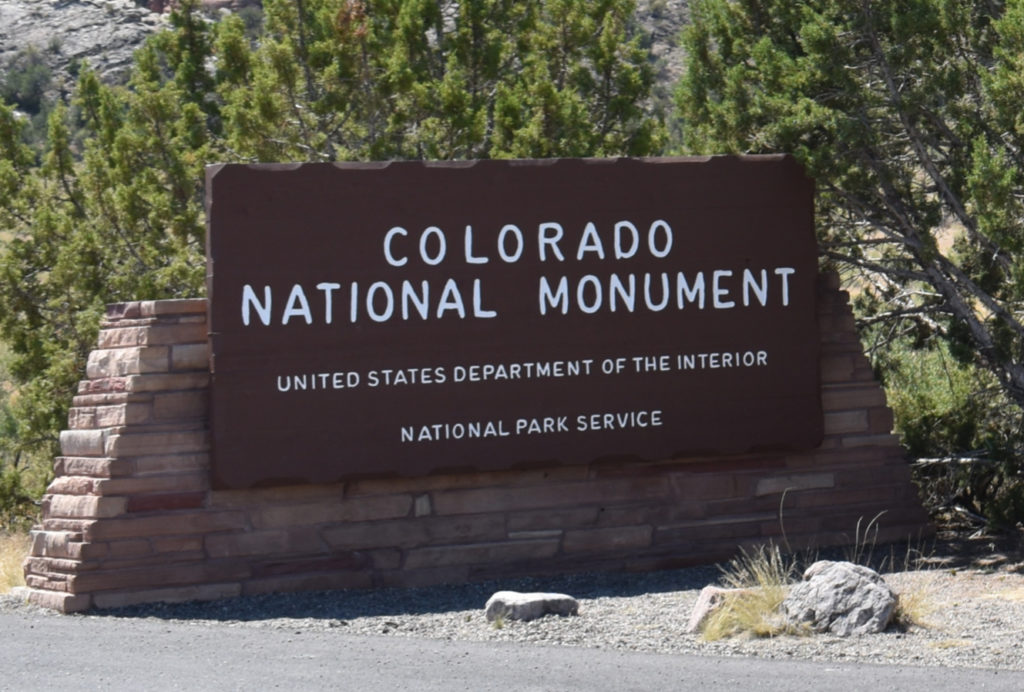 Just then, we all saw a sign for a campground – with an arrow pointing to the left.  The left??  But we had just driven several miles with what we were certain were shear drop-offs to the left!  How in the world was there going to be a campground in that direction??  Trusting that the signs couldn’t possibly lead us over a cliff, we followed the directions and soon found a self-check-in kiosk for a campground.  With a huge sigh of relief, we drove around the campground and found an empty site.  Quickly we set up our tents, inflated our air mattresses and promptly fell asleep in the warm night. 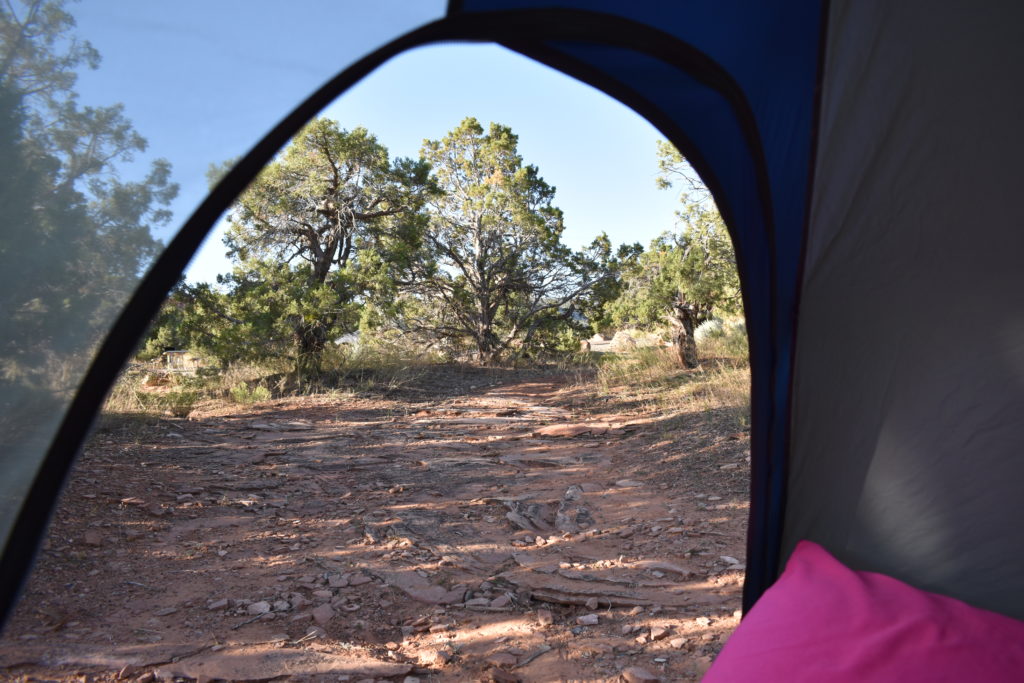 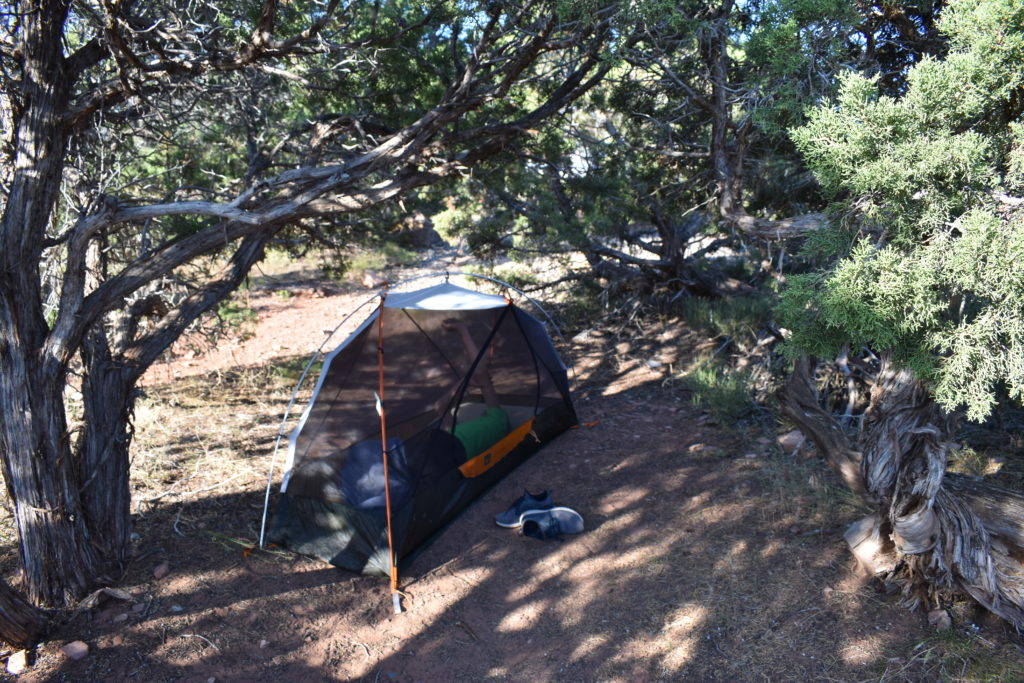 In the morning, we were awoken by the birds and found ourselves in a magical place.  A brief exploration led us to find we were on the top of a mesa with gorgeous overlooks all around.  After taking in the views from the campground, we realized that (amazingly!) we had a mobile signal.  Given that the day was absolutely beautiful, the campground was essentially empty, and we needed to get online to do some work, we opted to set up our office/schoolroom in the campground.  A couple of productive hours later, we packed everything up and proceeded to drive out.  What a shock we were all in for.  The beauty of the campground was far surpassed by all the sights that we saw upon exiting.  Several photo stops later, we came across the Visitor Center and eagerly entered.  The kids were both enthralled with the information that surrounded them about the area known as the Colorado Plateau and we all learned how so many of the parks that we were intending to see were connected geologically.  We also learned of the history of the area and how part of the road into the park (the part that we had unwittingly driven up in the darkness) was constructed as part of the New Deal after the depression. 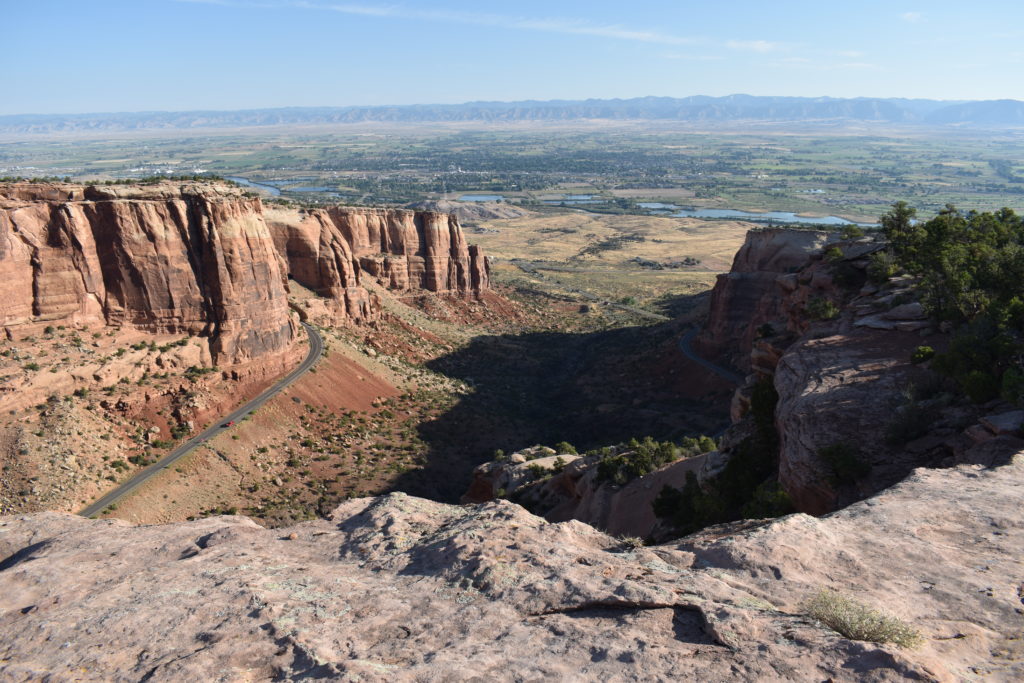 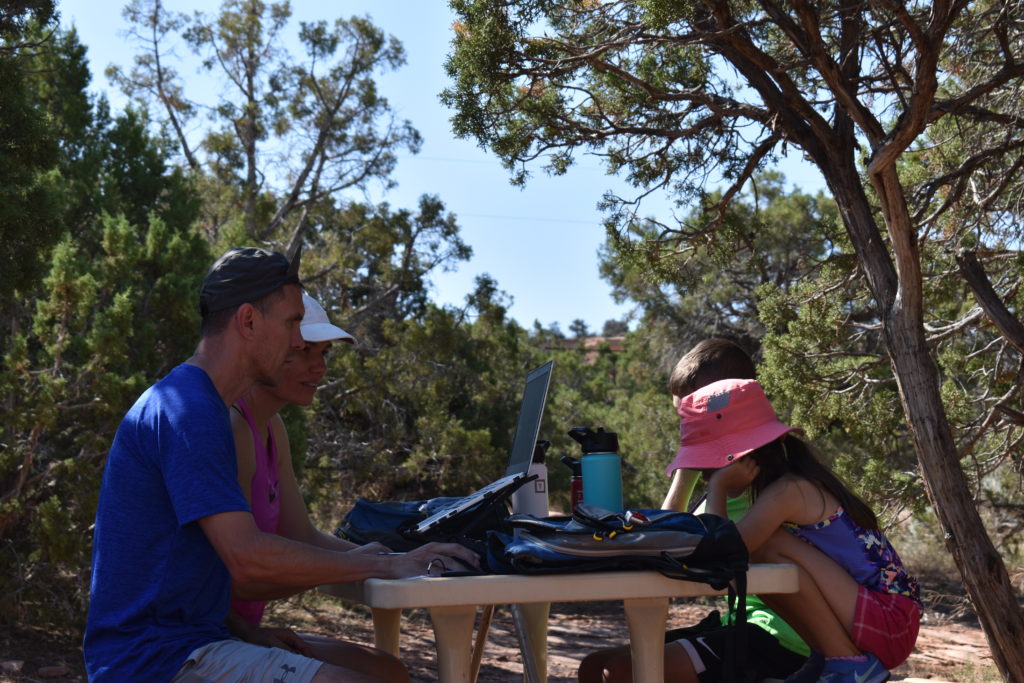 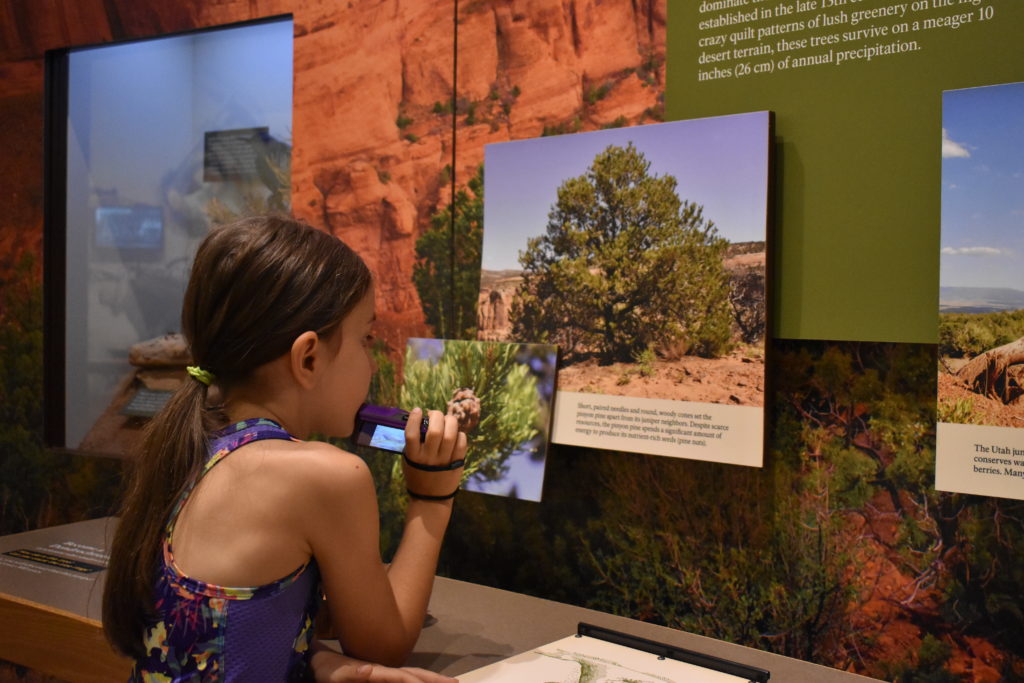 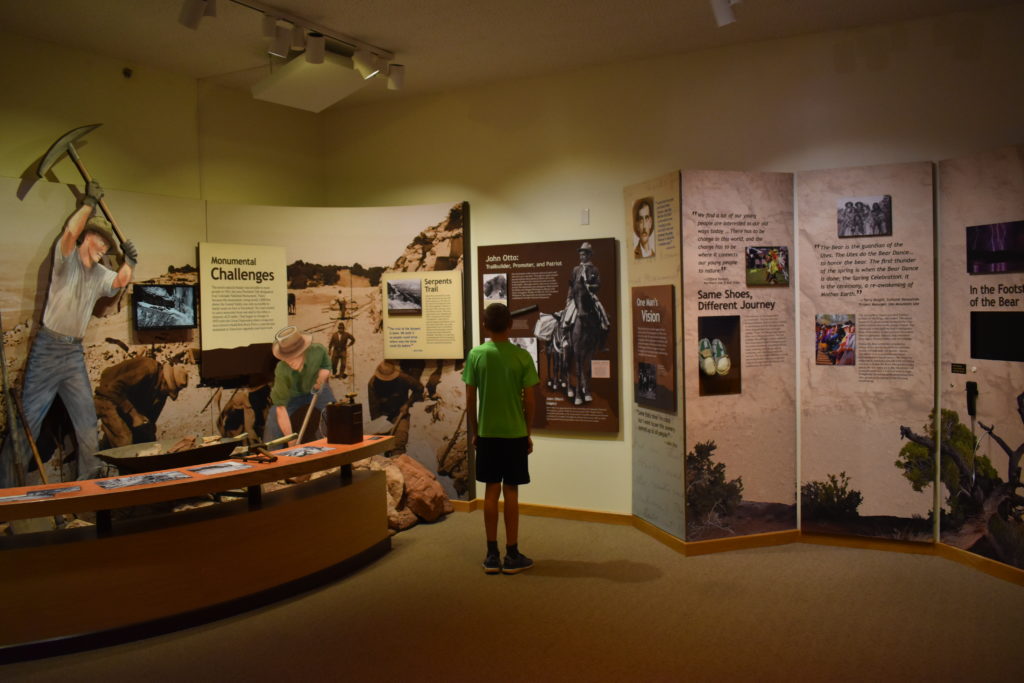 Reluctantly leaving the Visitor Center, we proceeded back to Grand Junction.  What should have been a 20-minute drive, easily lasted 2 hours.  Each twist and turn around a bend revealed a new surprising view with amazing colors and rock formations.  Think Grand Canyon, but on a smaller, more intimate scale, with multiple canyons back-to-back, each one unique.  Truly impossible to describe in words.

How was it that this amazing park existed and yet we had never even heard of it??  We were quite familiar with Colorado and had spoken with many people who had traveled the state extensively, and yet we were completely unaware that the Colorado National Monument existed. 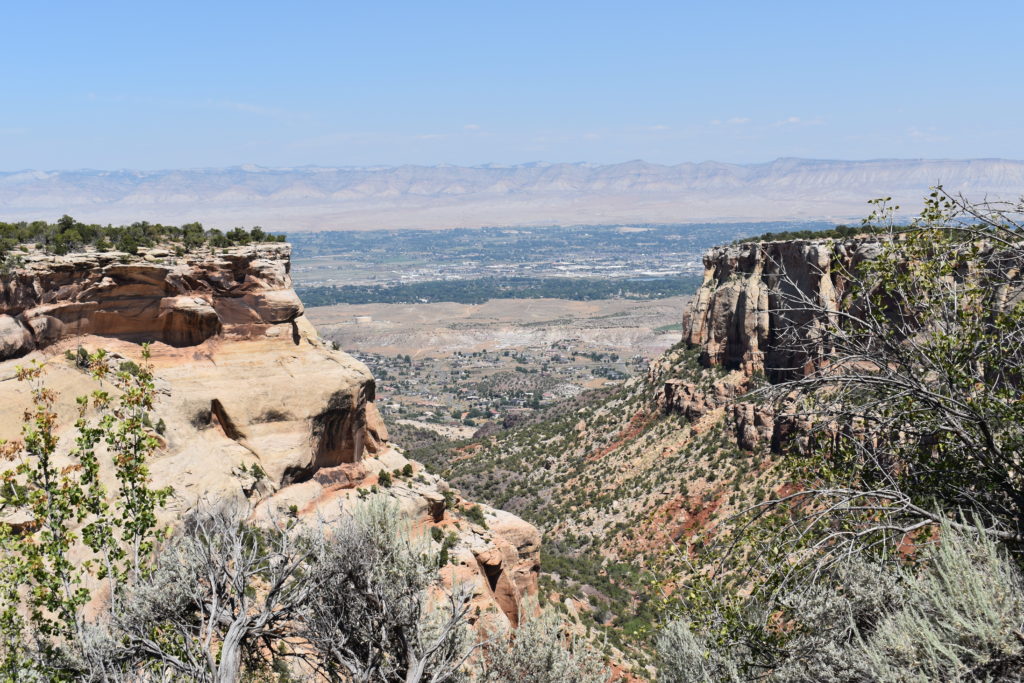 And how was it that we ended up here in the first place??  Oh right, our car had issues and we had to go to Grand Junction to get a rental…  And this is what we experienced!  We were all so happy that we didn’t miss out on this amazing gem of a park.  And while I strongly recommend that if you are ever near Grand Junction, CO, you check out the Colorado National Monument yourself, I also strongly recommend that you do so in full daylight!  Not only will you see amazing views, but you also will keep several more grey hairs from sprouting from trying to drive this road in the dark. 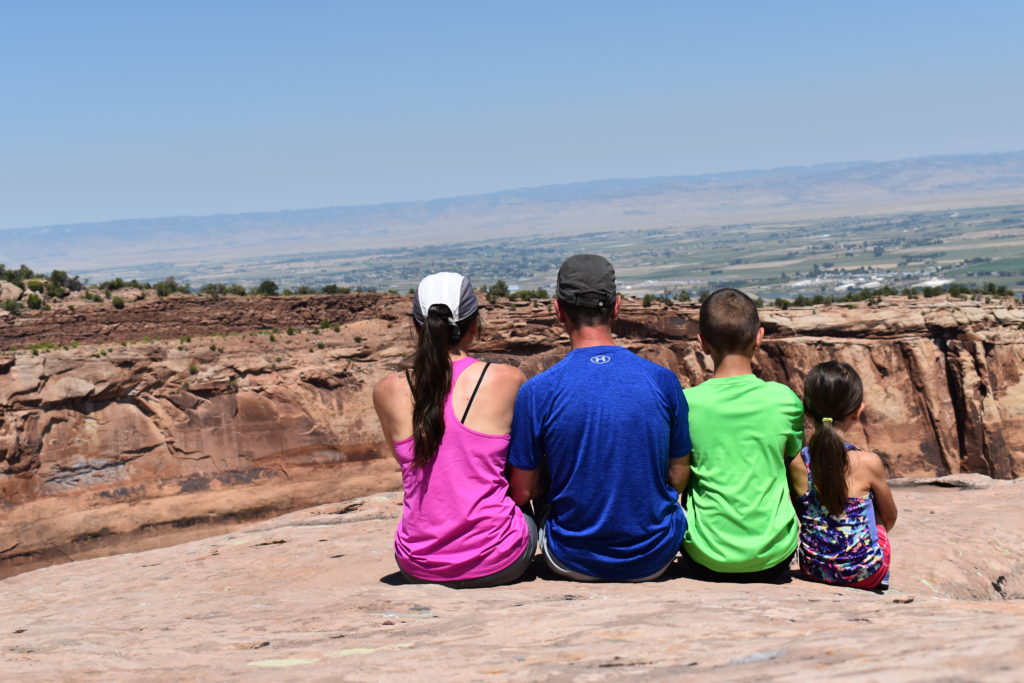 After finally returning to Grand Junction, we faced the ordeal of trying to get rid of a 15-year-old (absolutely BEAUTIFUL!!) Jaguar with maintenance issues.  Not the easiest task, especially with the need for us to get on the road to Durango to catch a train.  After several attempts, we were finally successful and hit the road towards our next adventure (post coming soon)…