What A Train Ride

After finally finding someplace to sell our car (read about that here), it was nearly dinner time and we still had several hours to drive in order to make it from Grand Junction to Durango, CO that evening; we needed to be at the train station by 8am the following morning.   After a quick dinner break, we got on our way and made it to Ouray just as the sun was setting behind the mountains.  Beautiful!!  We stopped for a brief walk around Ouray (we had been there last September when John’s son, Joel, had gotten married) to stretch our legs and for John to have a little break from driving.  I offered to take over at the wheel, but somehow, John knew that he should continue (THANKFULLY!!). 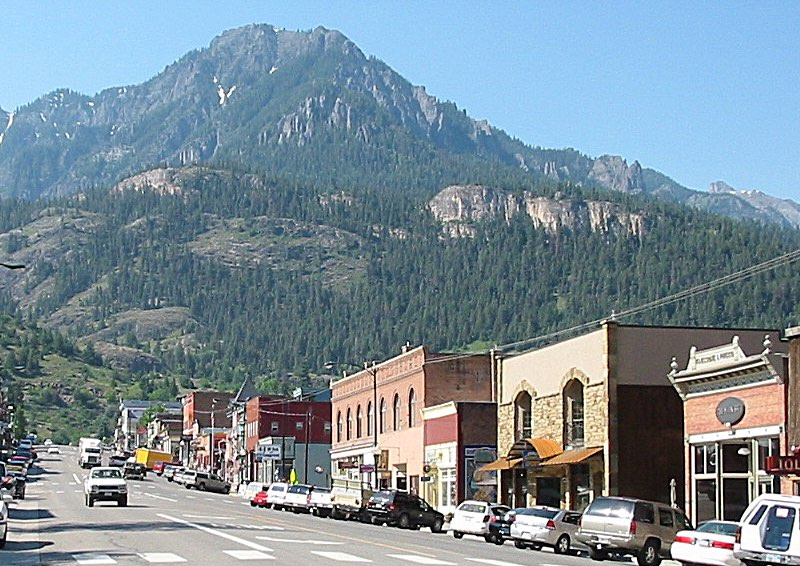 What followed was a rather harrowing drive up into the mountains and then through the mountains, and then further through the mountains… until we thought that the mountains would never end!!  The road leading up out of Ouray was quite an experience – no guard rails, steep drop-offs, hairpin turns around cliffs – one that would be much better suited for daytime driving, no doubt!  After finally reaching the top, we thought we would cruise down the mountain and into Durango.  The road had other ideas – lots more ups and downs, twists and turns.  Oh, and did I mention all of the deer that just had to check out our van as we drove past?  Needless to say, we were all relieved when we finally reached Durango! 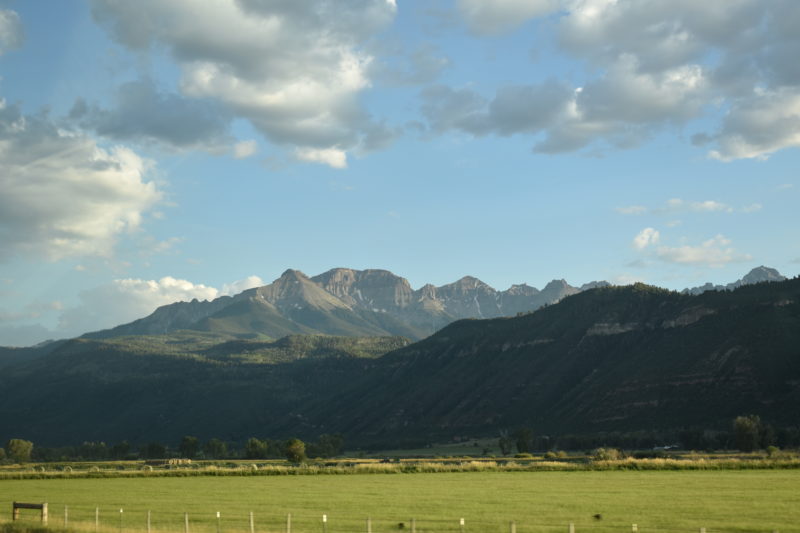 The following morning found us scrambling to pack up our backpacking gear – we would be riding the Durango to Silverton steam train up into the mountains, exiting the train, backpacking overnight, then returning on the train the following afternoon.  With much hurrying, we packed what we thought would be the minimum we could get away with and made it to the train with a few minutes to spare. 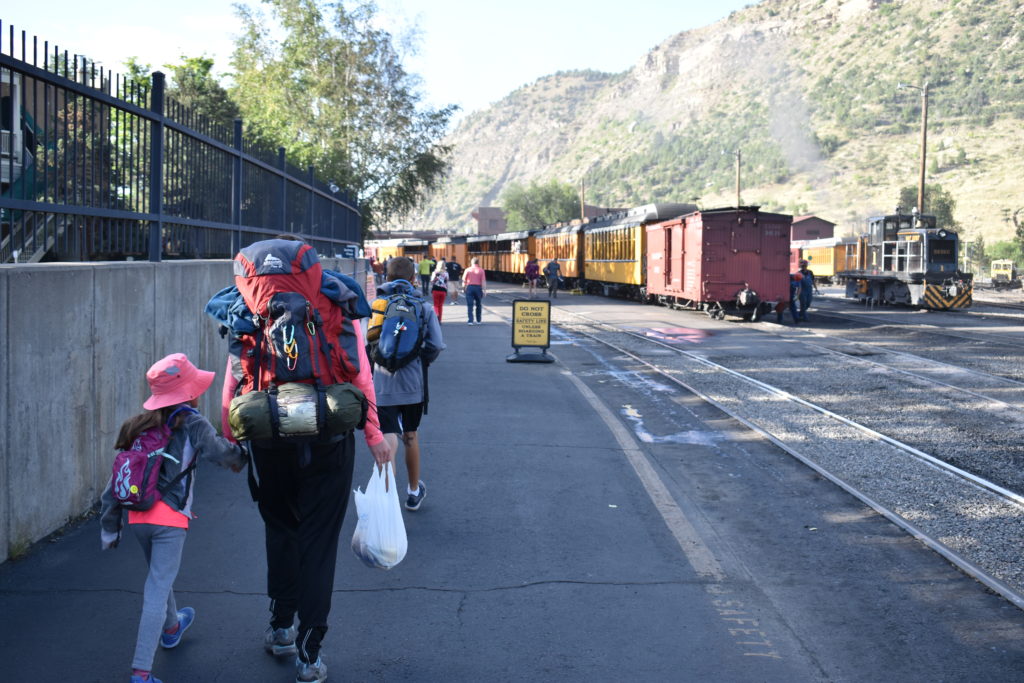 John had been very excited to share this area with the rest of us.  A couple of years previously, he had joined Joel who was hiking the entire Colorado trail.  John met up with him for the last leg of the journey and was able to experience the true vastness and solitude of the mountains. Unfortunately, John suffered from a bad case of altitude sickness – not eating for several days while doing extreme hiking eventually takes a toll on the body.  Thankfully, before he became debilitated, John was able to safely get off the mountain by flagging down the Durango-bound train and was completely blown away by the ride.  He was adamant that we not drive through this area without riding the train. 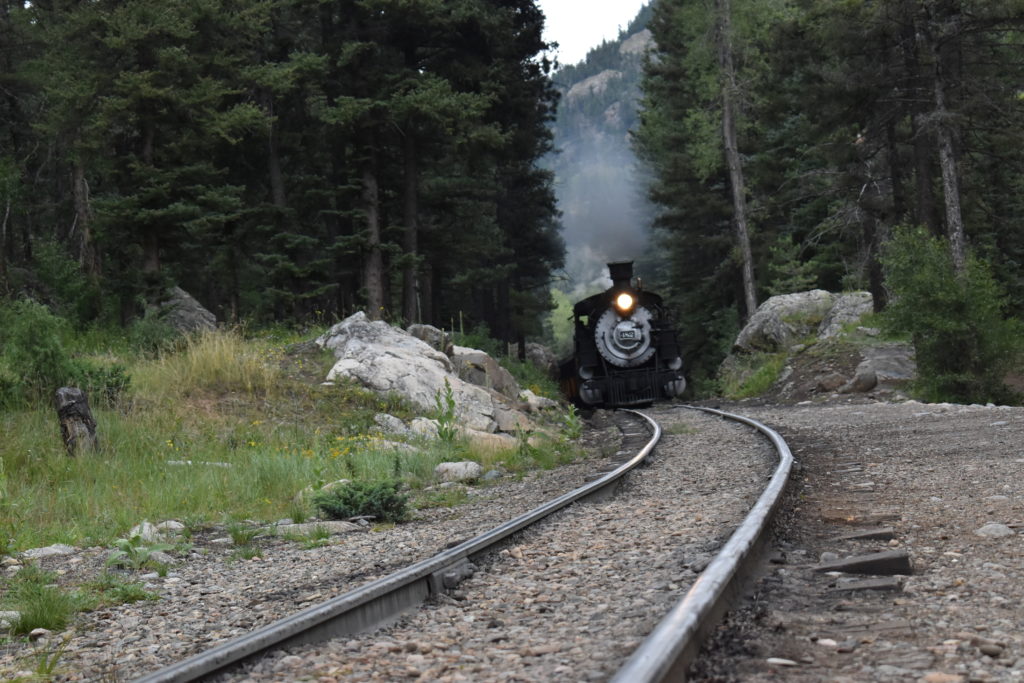 The steam engine train – running since 1882 – started out slowly in the town of Durango, then gradually climbed into the mountains for some breathtaking views.  On one side of the train, there might be a sheer drop-off a thousand feet deep, while the other side of the tracks was hugging a rock wall.  In some places, you could reach your arms out and touch the rocks on both sides of the train (although I really wouldn’t recommend that!).  The train had a snack car (serving snacks, sodas, water and even adult beverages) and passengers were welcome to travel between the cars.  At one point in the ride, the train crossed a stream and let off excess steam – the result was a beautiful rainbow over the water that was extremely picturesque.  After a couple of stops to let off some rafting groups, it was our turn to depart.  We gathered up our small daypacks, said goodbye to our fellow passengers, then found the baggage car and picked up our 2 large backpacks.  Only one problem… we weren’t in the same spot where John had gotten onto the train a couple years previous! 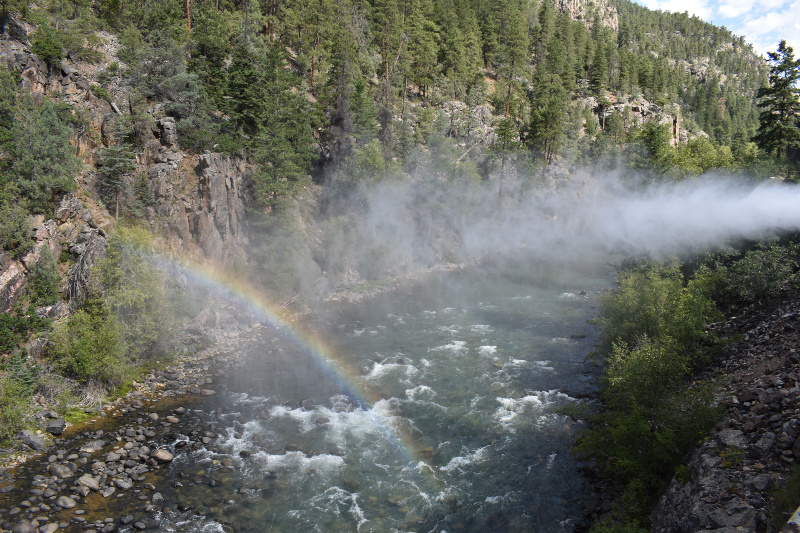 When we had booked the tickets, the woman on the phone wanted to know where we wanted to exit the train to hike.  Unsure of the name of the glade where John had waved down the train, I told the woman that it was near the Colorado Trail.  She informed me that we wanted the Needleton stop and booked those tickets.  Much to John’s surprise (and ours when we realized it!), the spot where we had just been dropped, was not where John had hiked.  He had planned out where we would go and was excited to share that area with us…  We had to come up with Plan B.  And Fast! 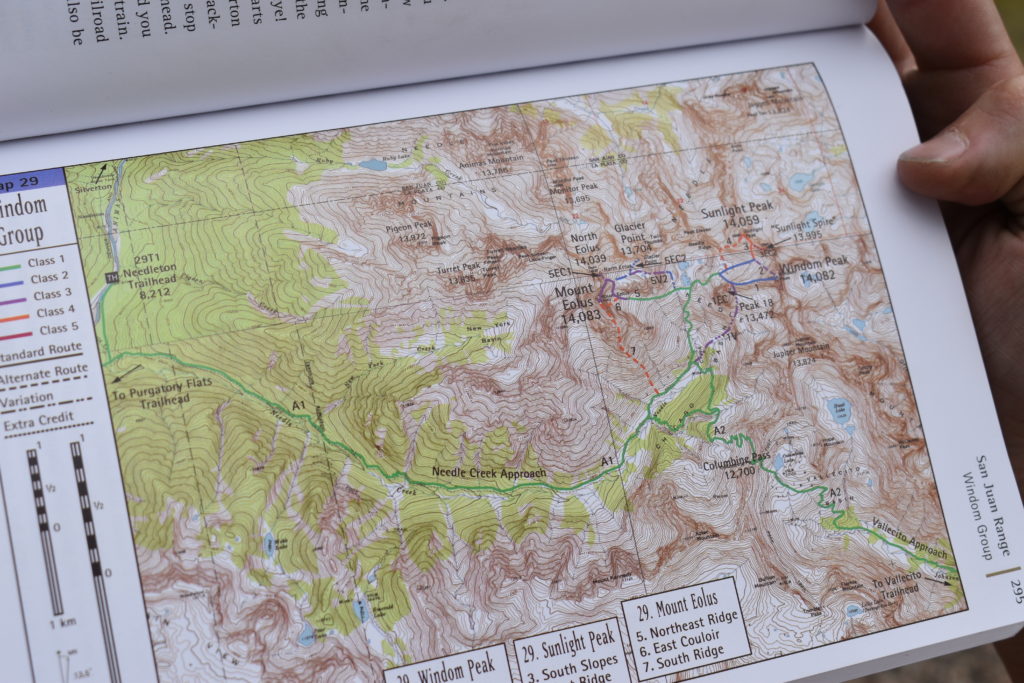 Thankfully, we were not the only hikers who exited the train that morning.  Thinking fast, John approached a couple who had a map and asked if he could take a picture of it.  At least we had an idea of what was in the area – although not nearly the detailed plans that we would usually have before a backpacking trip.  Following the rest of the group, we crossed over the raging river on the bridge and began following signs for a hiking trail, with no real plan of where we were going.  Did I mention that there were also lots of dark clouds that had gathered and thunder was booming in the near-distance??

Eventually we came to a fork in the trail and a National Forest sign-in book.  Still unsure where we were going, we proceeded up the trail.  And when I say, “up”, I mean up!  We started on a rather steep incline that just seemed to never let up.  Nor did the flies!  Thankfully they weren’t of the biting variety but having them swarm around your face while you are hiking is just not pleasant.  The clouds rolled in, dropped a few sprinkles, but thankfully, didn’t drench us.  And we continued climbing.  To where??  We still didn’t know.  John and I eventually decided that we would try to find somewhere to camp and just be okay with that.  Only one problem, the trail hugged a mountain slope on one side and a raging stream far below on the other – absolutely no place to camp!  Eventually we came across a couple of gentlemen who were hiking to the Chicago Basin – finally a real destination (although none of us had any idea where it was or how much further we had to hike!). 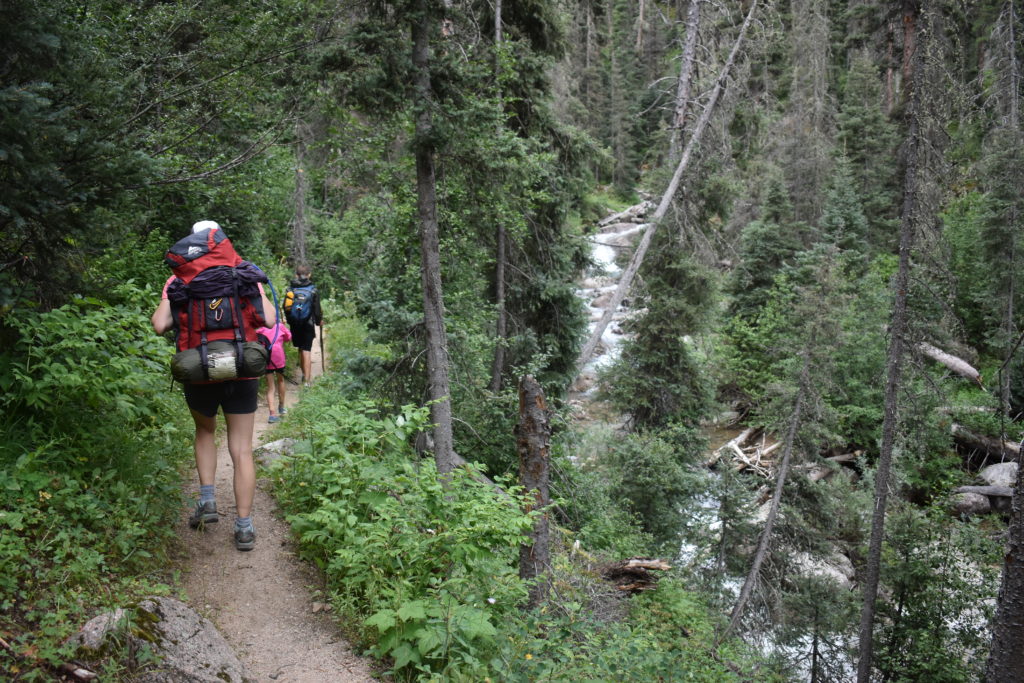 ​After what seemed like many hours of hiking upwards, dodging rain and freezing “breezes”, trying and yet failing to find this basin, Trevor spotted an ideal campsite.  We were all in.  We crossed through a valley which had obviously been struck by an avalanche at some time and made our way towards the stream to a group of pine trees.  We quickly set up our 3-man tent (we decided that for the sake of keeping all of us warm that we should all squeeze into the 3-man tent and not use Trevor’s 1-man tent that was primarily mesh) as rain was once again threatening.  After a brief sprinkling, the rain clouds gratefully left and we enjoyed our dinner followed by a brief hike up the trail to stretch our legs, and also see if this seemingly mythical Chicago Basin was around the bend.  While we didn’t find the Basin, we did find many of our fellow train passengers camped just up the trail. 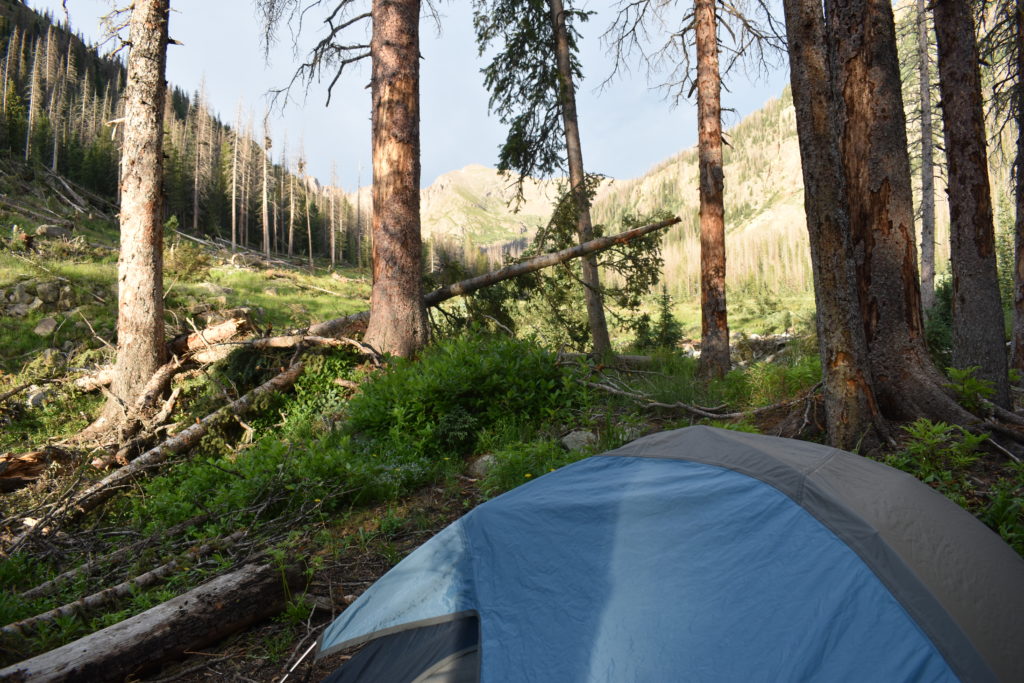 We got through a rather cold night (did I mention there was a pile of snow 10ft from our tent??) – sleeping in sweatshirts, rain jackets, pants and winter hats and gloves – then woke to a beautiful mountain day with amazing views in every direction and a sky as blue as can be.  After a delicious breakfast of instant oatmeal and dried sweet cheeries, we packed up camp and headed back up the trail.  We left our bags trailside with the intention of hiking up the trail ~30 minutes, before returning to our bags and hiking back down the mountain to catch our train at 3:30pm.  With that plan in mind, we headed further up the trail, but quickly became distracted by a rushing waterfall and went to explore and take pictures.  We returned to the trail and decided that we had better start back down – we had no intention of missing the return train! 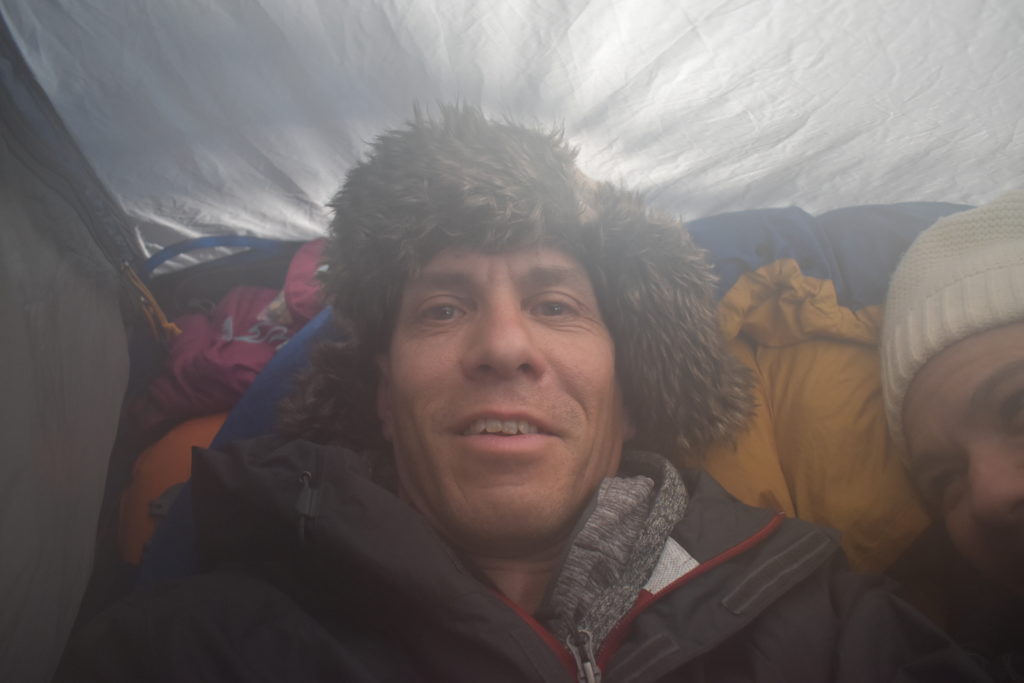 Shortly after we started back, we again ran into the two gentlemen from the day before.  They informed us that the Chicago Basin was only ~15 min further up the trail and that it was definitely worth seeing it if we had time.  We opted to go for it and quickly reversed our direction.  We made it to the Basin and it was definitely a beautiful site – several mountains surrounding an area with streams and rocks and natural beauty (the kind that never transposes well on camera!).  All too soon, we needed to leave; we knew that it would take several hours for us to get down the trail to the train stop.  We returned to our bags and started down the trail – only to realize a surprise had been left strapped to one of our backpacks!  A sign of passing along good trail fortune, a crisp $100 bill was tucked into the strap.  We all stood there with our mouths open at such a kind gesture. 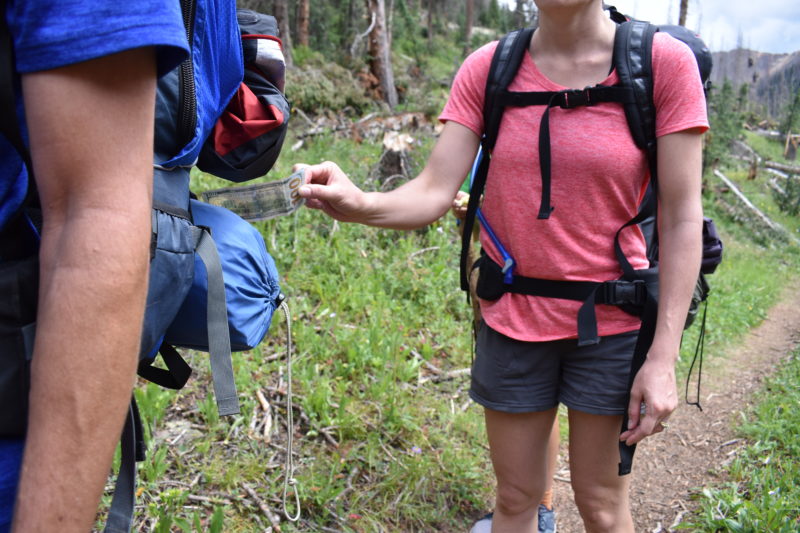 ​With eyes on the clock (ok, really the phone, which had no service, but did have a functioning clock!), we quickly headed down the mountain, certain that we would run into our benevolent friends and properly thank them.  We never did encounter them – so if either of you ever happen to read this, know that your gift was appreciated and was passed on to others.  THANK YOU!!  We quickly traveled down the trail, donning our rain jackets as the skies once again darkened and dropped rain upon us and skipping lunch to make sure that we weren’t late.  Brenna was determined not to miss the train and did an amazing job setting a challenging pace down the mountain.  We made it to the bridge and train stop with ~40 minutes to spare and gratefully scarfed down our delicious lunch of peanut butter and jelly on a bagel prior to boarding the train. 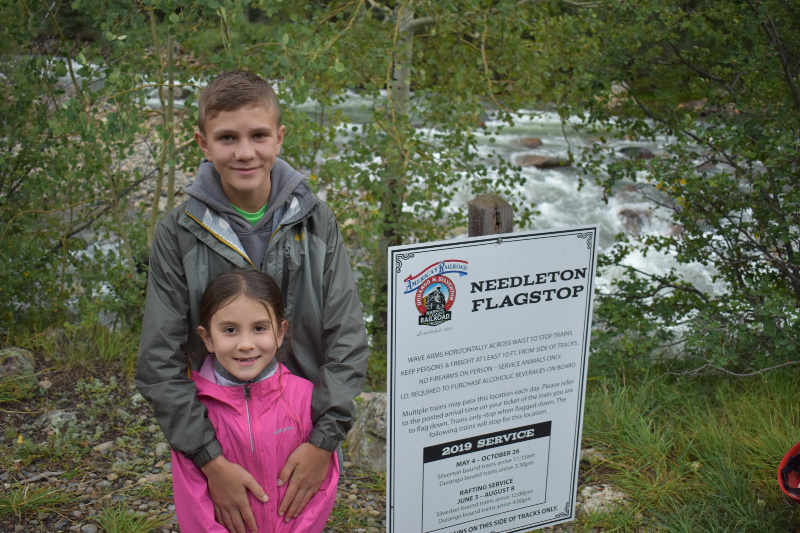 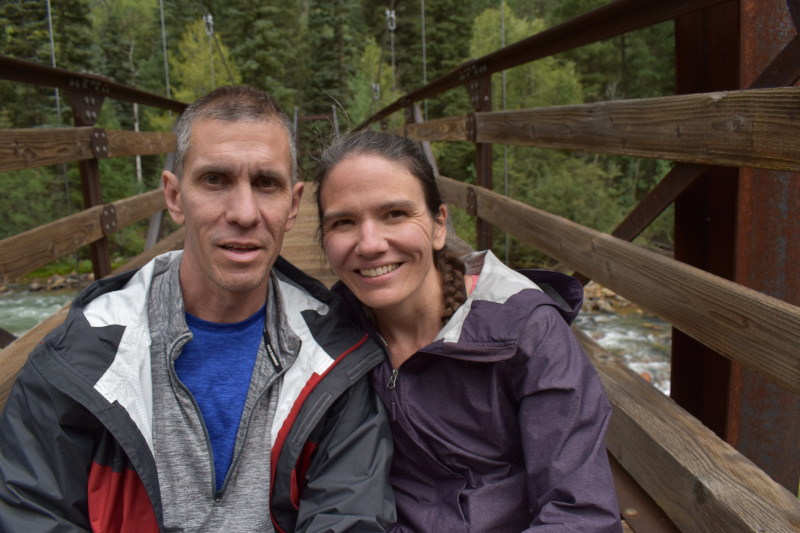 Although all of us were feeling the strain of having hiked hard for 2.5 hours, the train ride down was just as beautiful as the ride up, with breathtaking panoramas of the beauty of the mountains.  All too soon we arrived back in Durango, tired, but extremely pleased with the journey we had just experienced.  While we were disappointed that we didn’t end up in the area that John had visited before, we did thoroughly enjoy the quiet and the beauty of the mountains, as well as the amazing train ride.  We were on to our next adventure (check it out here)… 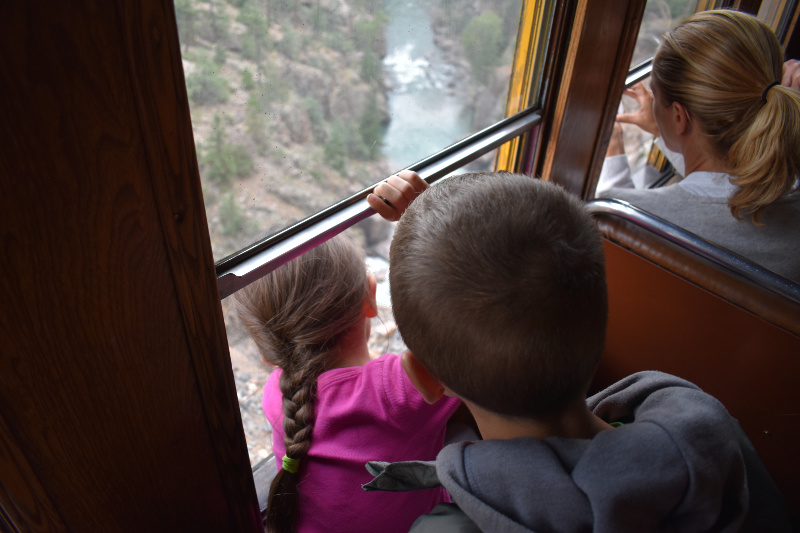 ​If you haven’t checked it out yet, let’s connect HERE

1 thought on “Durango to Silverton Train”