After getting off the train (see previous post) from our backpacking trip around 6pm in Durango, CO, we opted to pamper ourselves with a dinner out and a hotel room for the night.  We were all grateful for the soft beds, the warmth of blankets and the opportunity to recharge all our electronics!  We awoke in the morning feeling very much refreshed and ready to explore another National Park.  Less than an hour later we entered Mesa Verde National Park and immediately went to check out their visitor’s center.  Inside, we found a wealth of information as well as a vast holding of Native American artifacts from the region. 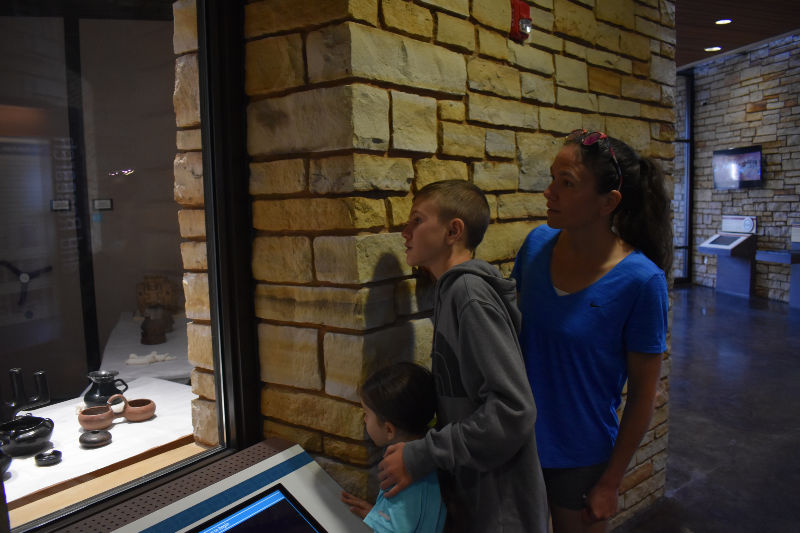 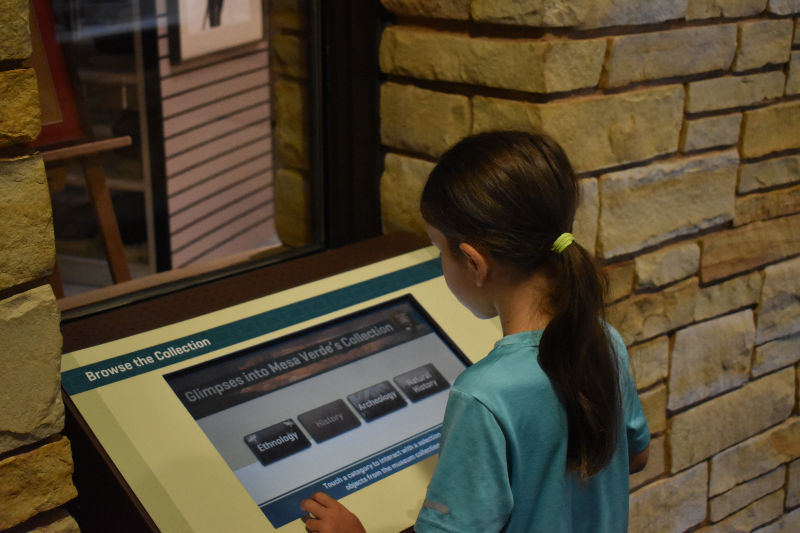 After speaking with a ranger, we went to the counter to purchase tickets for some ranger-led tours of the ruins.  The only way to see the ruins up close is to take one of these tours, which are extremely reasonably priced at only $5 per person.  We chose 3 different tours that we felt would give us broad exposure to the different areas of the park.  With several hours until our first tour (advised by the ranger we spoke with to avoid the worst of the direct sunlight and heat on the tour), we ventured into their campground, hoping to find an open site.  Their campground does not participate in the online registration program, so there were plenty pf sites to choose from.  We set up camp, ate lunch, then drove to our first tour – Balcony House.

This tour had been described as the most adventurous tour in the park, but also a very immersive tour.  Our first tour proved to be extremely interesting, as well as a little adventurous with a climb up a (32ft) leaning ladder as well as a crawl through a 12ft long tunnel (the ancestral Pueblo people who built the structures at Mesa Verde were much smaller in stature than we are currently, so the tunnel was likely a little easier for them to maneuver through!)  It was a little disconcerting to learn that there has never been any evidence found for ladders in the ruins; the theory is that the Pueblo people scaled down the very steep rock faces in order to access their cliff-dwelling houses – YIKES!! 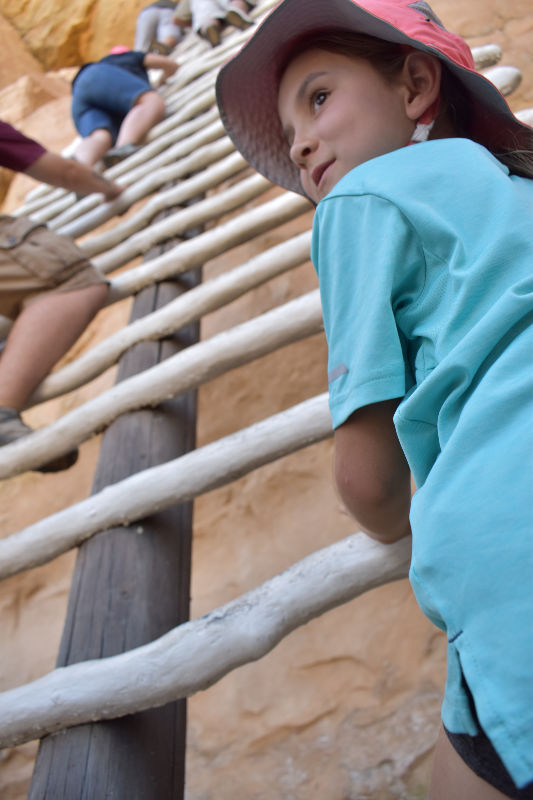 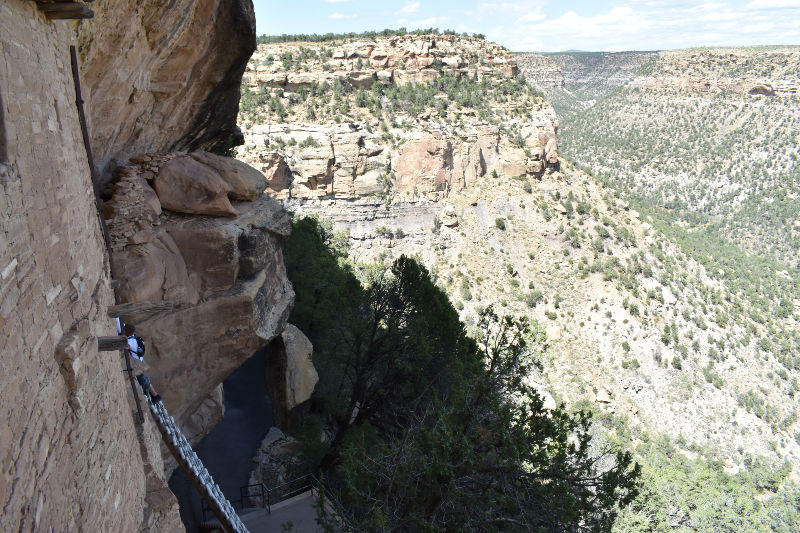 We also learned about kivas – sunken, round “rooms” that appeared to be dug out of the cliff, but in reality, we built upwards with the surrounding areas around it filled in to make the tops level with the “floor” of the cliff.  Although there is plenty not known about the ancestral Pueblo people who built and lived in these cliff dwellings, it is known that these rooms had a great deal of ceremonial uses. 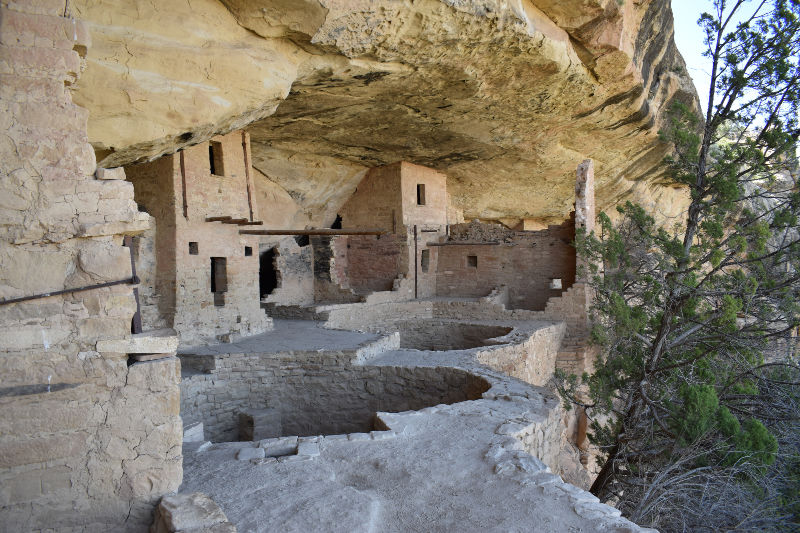 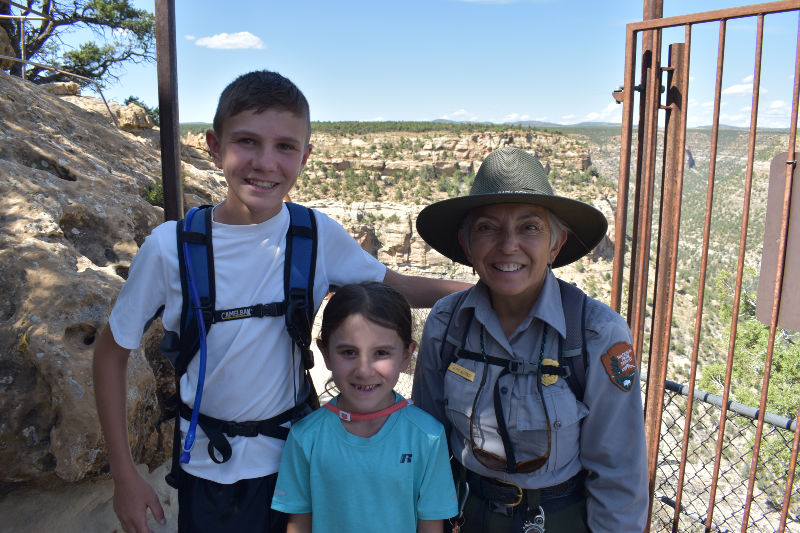 After climbing out of the ruins (through the 12 ft long tunnel, then up a 60ft open rock face via another couple of large ladders along with some very rough steps carved out of the cliff face) we made it back to our vehicle and then on to our next tour – Cliff Palace.  I had been a little worried that after the “adventurous” Balcony House, that the tamer Cliff Palace would pale in comparison.  But I shouldn’t have worried; each of the rangers who lead the tours (they rotate which tours they lead each day) create their own narrative – there is no script, allowing them the freedom to speak about those things that are most exciting to each ranger.  Our second tour proved to be more informative than the first just due to the simple fact that there was more time for the ranger to talk, given that we didn’t have to wait for 30 people to scale up a ladder before the ranger could begin speaking again. 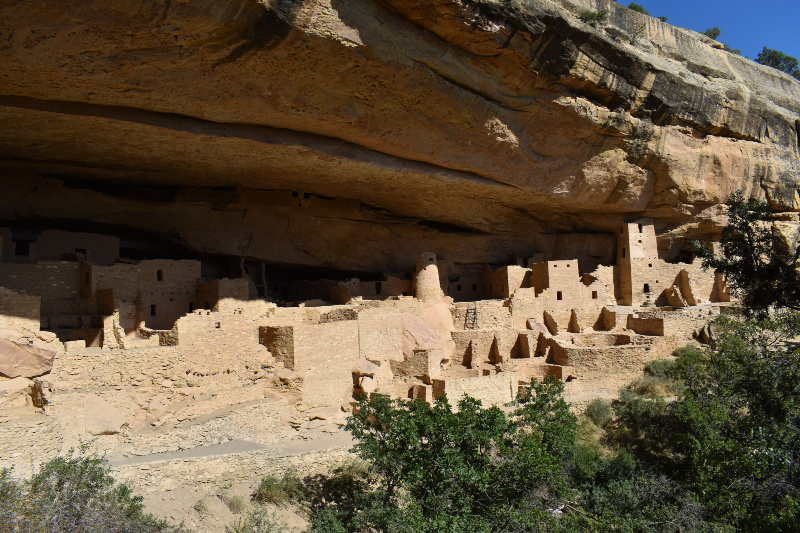 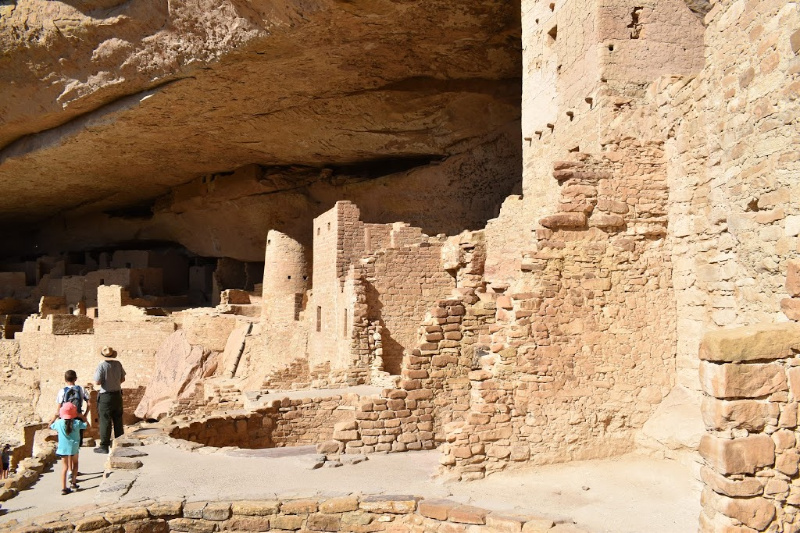 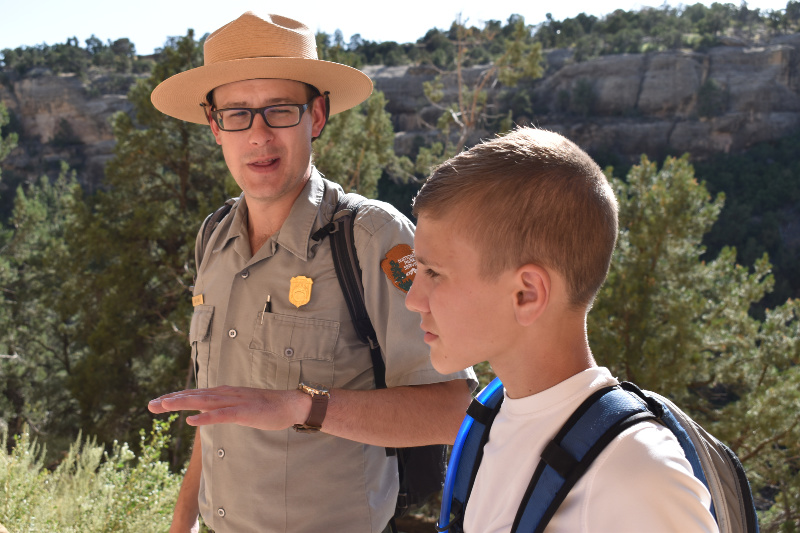 That evening after dinner (as well as laundry and a shower in their very nice facilities), we participated in their ranger-led evening program.  The kids were both very moved about the topic – light pollution and how all the advances in technology have made it impossible to see the stars in large portions of the earth.  The ranger described how individuals could help reduce light pollution and also gave a very interesting narrative about some of the stories that the ancestral Pueblo people told about the constellations as they see them.  All in all, a very enlightening presentation.

The following morning found us packing up camp again and then heading to the second mesa top in Mesa Verde – Wetherill Mesa – for our last tour, Long House.  This tour also proved very interesting and informative, as the tour lasted 2 hours (where the previous two tours were only 1 hour each).  Part of the reason for the length of this tour was the walk that was needed to reach the ruins (a little over a mile – no problem for the 4 of us who had been hiking quite a bit, but the group stayed together, so the pace was a little slower than we were used to).  The ranger did a great job of trying to keep us in the shade for as long as possible, while also allowing us plenty of time to see the ruins up close. 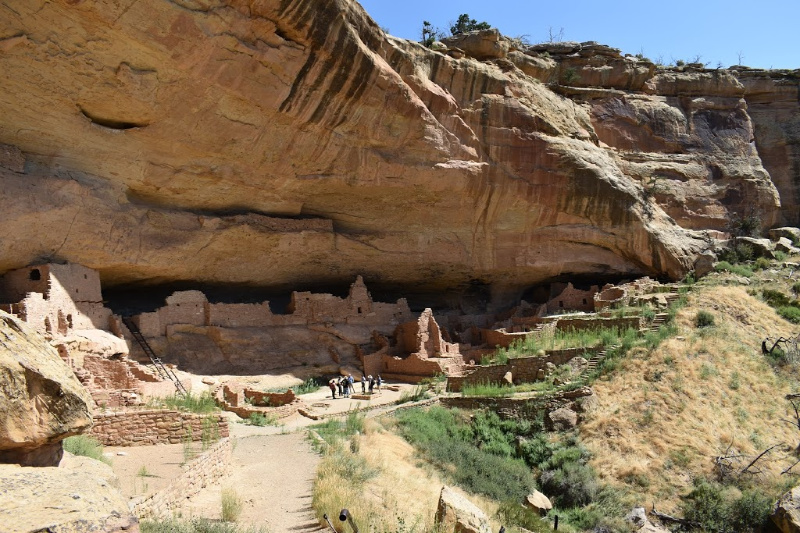 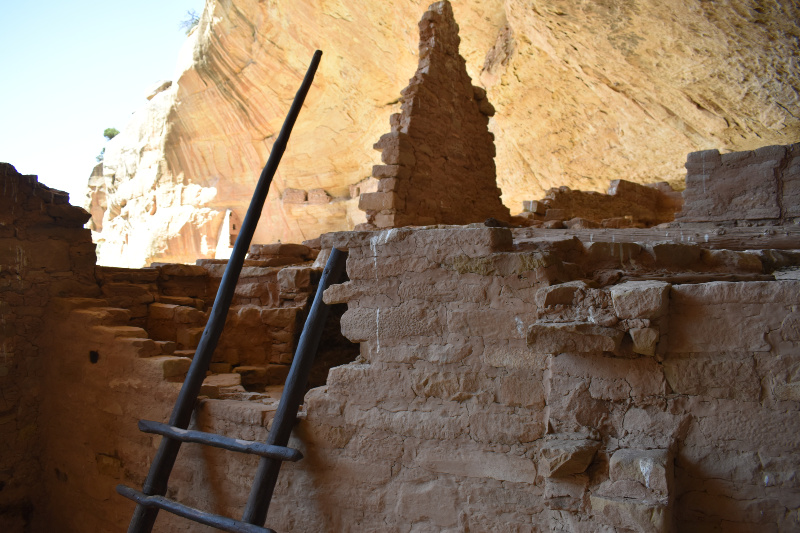 I’m glad that we took the time to take all 3 tours; each one was unique and offered different insights into the people who had built and lived in the cliff dwellings, as well as the technological advances that they made, why they had settled in the area to start with, why they moved down to the cliffs and how we know as much as we do about the ancestral Pueblo people (more difficult than you might imagine, as the dwellings had been deserted for 600 years!).  Having finished our last tour, we left Mesa Verde and headed on to our next adventure – one that we were all totally enthralled with (blog coming soon!!) 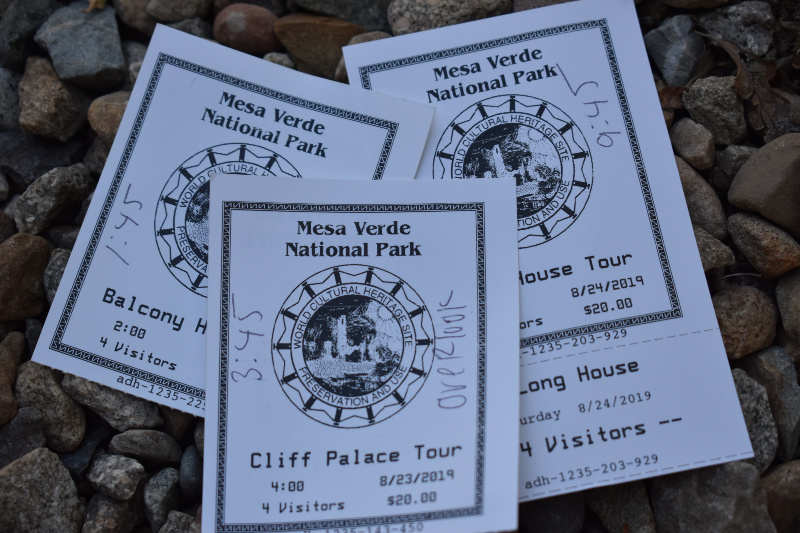 Make sure to check out our FB Page – many more current updates can be found there along with additional photos.