As 2020 comes to a close, we look back and reflect on all that has happened this year.

Before we left the States on our journey, we had dreams of writing blogs all the time and keeping up-to-date with our travels and experiences.

We realized that working on our marketing business AND spending a lot of time building our financial coaching business (you can check us out here) AND world-schooling our children, 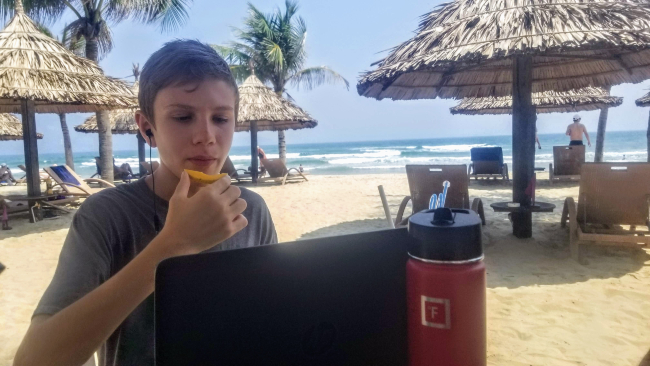 we had to make choices with our time, and unfortunately, blogging often didn’t make the cut. The words are all in my head, but I just need to make the time to get them out and on the screen… However, I felt compelled to let all of you — friends, family, friends of family, friends of friends, former colleagues, and friends we have yet to meet — know that we are alive and well and still loving life! 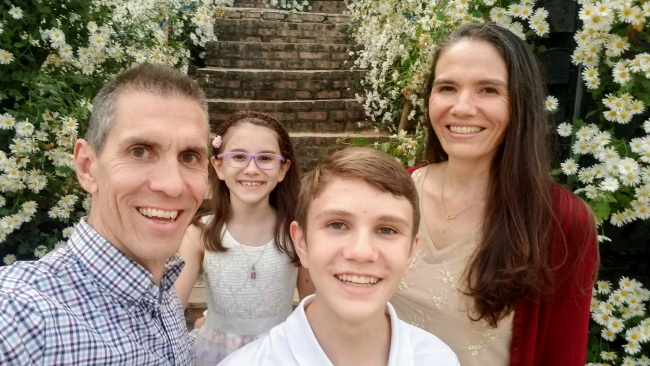 It has been nothing but a year of unexpected events.

Understatement of the year!

Having landed in Vietnam (an occurrence that we never anticipated in and of itself — but that’s another blog!) on Christmas Day 2019, 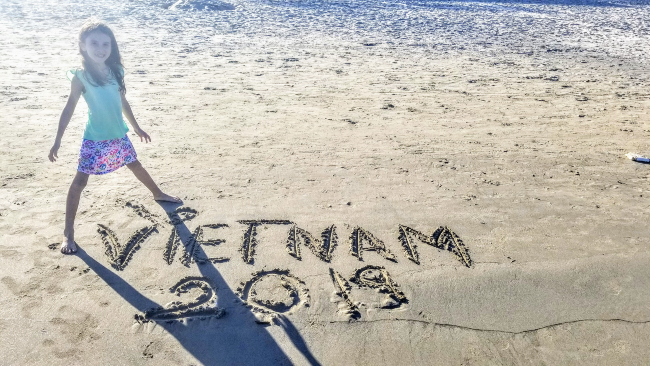 we experienced our first Christmas away from the States. Dinner that night consisted of eating tacos while sitting on squat, plastic stools in a Vietnamese restaurant listening to American Christmas music. Definitely a new experience!

We found Trevor ditching his crutches (which he had been using since he broke his leg in Bali in October – yet another blog waiting to be written) after the first hours on the beach in Da Nang. YEAH!!

We quickly found an apartment with a view of the seemingly endless, white sand beach and settled into exploring a new country and experiencing a new culture.

We were thankful to be back in a country where they drive on the right side of the road, but quickly realized that we would need to learn an entirely new set of traffic rules (driving on the wrong side of the road to make a left turn into oncoming traffic is only one such example — one that took a little getting used to!).

We were blessed to be able to spend some time with two traveling families that we had met in Bali at our family summit the previous October and both Trevor and Brenna took the opportunity to interact with kids their own ages. 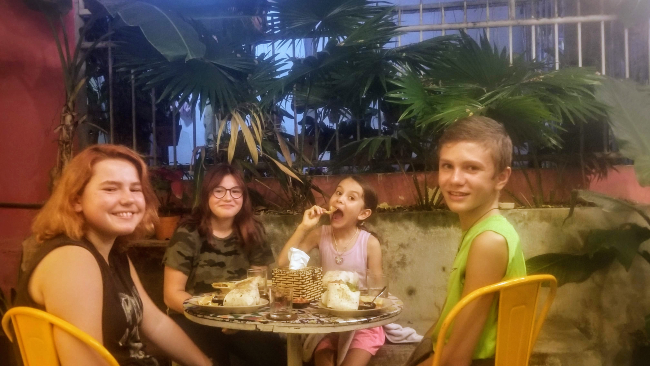 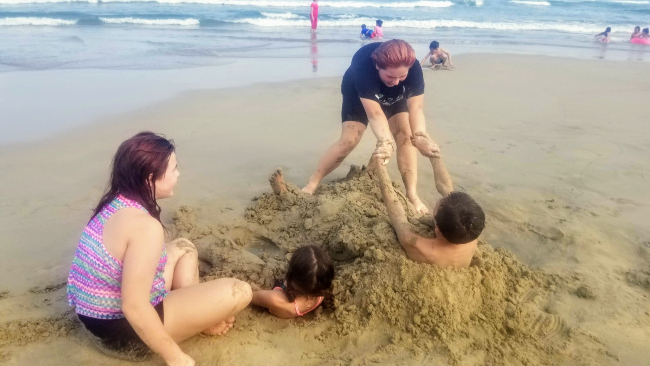 And Then Covid Hit. 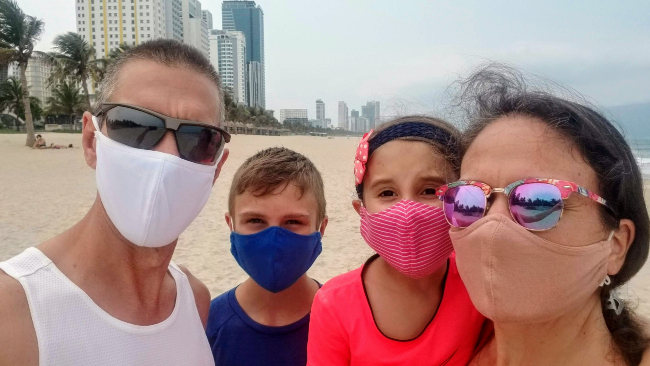 Suddenly our plans were thrown out the window. Instead of leaving in March, as we had intended, we made the decision to stay in Vietnam (you can see our story here), a decision which turned out to be extremely fortunate for us.

We survived our first lockdown of three weeks and were extremely thankful to be able to take walks on the beach again! While most of the businesses reopened, there were some, like our favorite bakery (a business run by a church in conjunction with a school for mentally-handicapped children), which remained closed.

Never-the-less, our lives returned to semi-normalcy, although with the caveat that we were essentially unable to travel outside of Vietnam. We regarded this as a very minor inconvenience compared to the havoc that Covid was wreaking in most places in the world.

June found us celebrating 3 birthdays — each focused on a new experience.

For Brenna’s birthday, we went to a water park/ natural hot springs/ huge life-sized dinosaur exhibit and enjoyed a nearly empty park with no lines! We had an entire huge play area full of water slides, squirt guns, and dumping buckets all to ourselves!

And while the weather appeared like it would end our day early with a thunderstorm, it blew off and allowed us to enjoy the hot springs with cooler afternoon temperatures.

For John’s birthday, we took a day trip to Bach Ma National Park,

an incredible preserve set in the “mountains” of Vietnam, about a 2-hour scooter ride north of Da Nang. There we experienced not only cooler temperatures (we were thankful to have brought our jackets!), but amazing vistas from the top (which had been used by the US Army during the Vietnam war).

We also explored a wonderful trail which led us to 7 “lakes” and the waterfalls connecting them. Although the water was frigid (being completely spring fed), Trevor braved the cold and jumped in! The incredible natural beauty of the area allowed all of us to reconnect with nature. It was easy to see why the French had made this area into a vacation spot.

A week later found us celebrating my birthday with a trip to the ancient ruins of My Son. 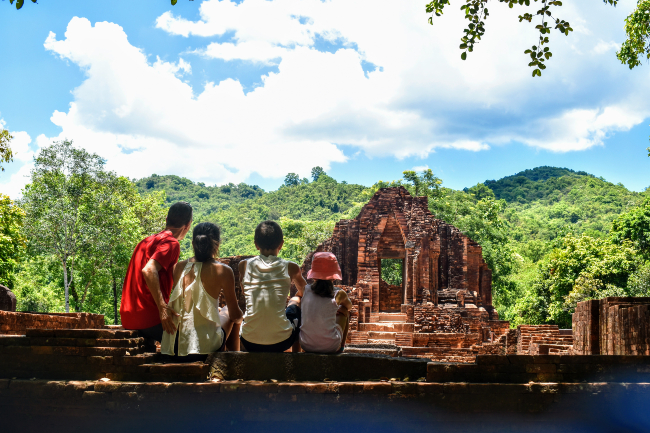 We happily explored through the excavated ruins for several hours, dodging the direct sun as much as possible and drinking tons of water to combat the oppressive heat.

We then hopped back on our scooters and headed to the small town of Hoi An where we finished the day with a cooling dip in the ocean followed by an incredible dinner (see more about our magical night here).

By July, we were contemplating moving from Da Nang and exploring more of Vietnam. Although we loved the beach (voted among the top 10 in the world),

and had formed a special friendship with our Vietnamese landlords, 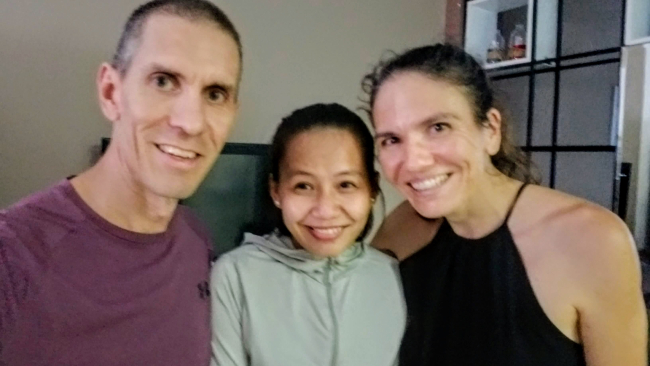 we were anxious to see more of the country and started to explore some options.

Covid had other plans.

After 100 days of absolutely no community transmission in Vietnam, suddenly there was a Covid case in Da Nang. That one case quickly turned into 2, then 10, then…

While the number of cases seemed incredibly small, especially in comparison to other countries, the Vietnamese government wasted no time in shutting everything down. In 2 days they evacuated the 85,000 domestic tourists out of Da Nang and locked down the city again.

Da Nang, with its beautiful white sand beach, is a favorite vacation destination for Vietnamese trying to avoid the summer heat. In 2 days it went from a thriving tourist town to a ghost town with everyone staying indoors.

We were stuck. Again.

But once again, so grateful for our situation. Our landlords had given us unrestricted use of a scooter which allowed John and I to get groceries once a week. In case you were wondering, yes, an entire week of groceries for 4 people can fit on a scooter along with two adults — although not very comfortably!

During the lockdown, it was announced that all foreigners living in Da Nang needed to get tested for Covid. We dutifully, although not enthusiastically, queued up with all of the other non-Vietnamese citizens for mass testing.

Thankfully, Brenna was exempted from the blood-draw and the nasal swab and only received a throat scrape. Trevor wasn’t so lucky; he experienced a nasty vasovagal response, but fortunately, we recognized this before he fainted and were able to get him sitting down in time. None of us appreciated the nasal swab that seemed to go all the way into our brains!

Finally, the restrictions were lifted in Da Nang and we decided that it was time for us to explore more. After nine months, it was really sad to leave the people that we had met and formed friendships with, but we know that we will keep in touch with them and hopefully visit with them again.

Knowing that our timing was not ideal as the rainy season was near, we hoped to head north to Hue, a smaller town near the DMZ line of the Vietnam war, spend a week there, then head a little further north and explore Phong Nha National Park, an incredible system of caves carved by underground rivers.

Fate had different plans in store for us.

While the day that we arrived in Hue was hot and dry, the days that followed were anything but. 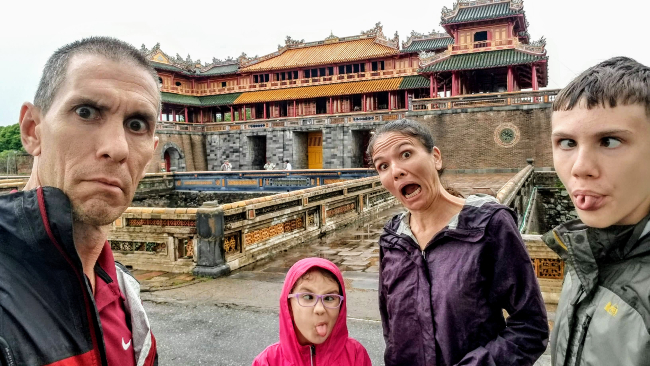 We managed to explore the imperial citadel (another nearly empty attraction) without rain for several hours after a morning downpour but got absolutely drenched as the skies opened up while we tried to find the exit. What followed were several days of torrential rain that caused massive flooding. Before we knew it, the river running through the city had overflowed its banks and the streets were waist-deep in water.

We were once again stuck.

Then the power went out…

But once again, we were so grateful for our circumstances. The hosts of our hotel were an awesome couple with two young daughters. The whole family moved into the hotel during the flood and three times a day, Binh would make a trip down the road (river?) to a friend’s house where he could get hot water. We shared a couple of candlelit ramen noodle dinners and are so thankful to have made more great friends. (We are VERY proud of both our kids who pitched in with the cleanup of floodwaters within the hotel without any adults. They were first on the scene to get water out of the hotel ground floor!) 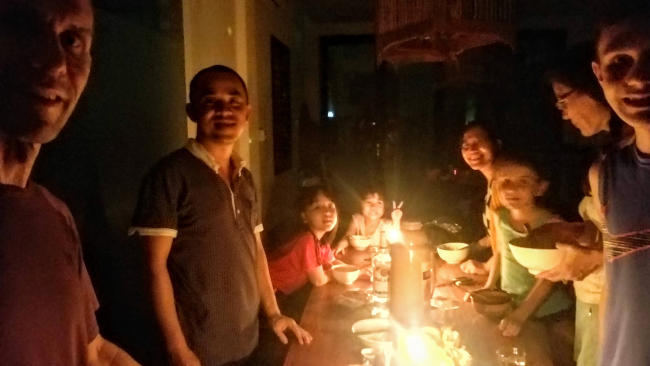 Unfortunately, all of the flooding meant that a trip to the caves was out of the question. So we changed our plans (again!) and caught a plane to Hanoi, which had been our intended final destination. We arrived in the middle of another rainstorm (someone surely was laughing!).

Having never lived in a really big city, arriving in Hanoi, with a population of 10 million, was quite eye-opening! However, we found a really nice apartment with a view of the enormous lake in the middle of Hanoi and settled in for a couple of months.

For Trevor’s birthday in November, we took a 3-day trip to Ninh Binh by scooter. The scenery there was other-worldly and we all once again relished our time reconnecting with nature.

We were able to do a couple of hikes as well as an incredible boat ride through the area of limestone karsts and underground rivers.

We followed that with a short drive to Cuc Phong National Park and had an amazing day hiking through the jungles of Vietnam. It was a great trip for all of us. 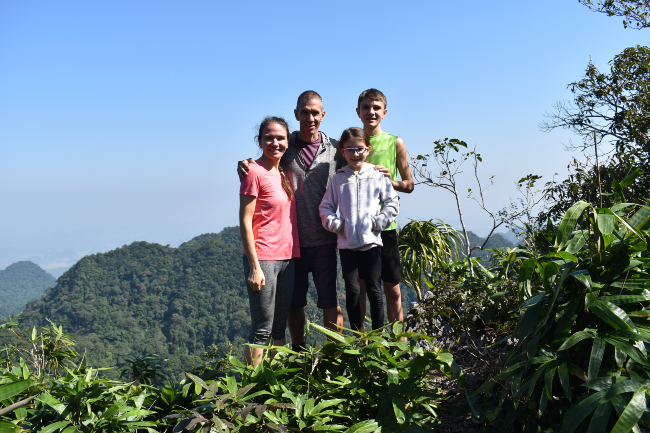 And just like that, the year was nearly over. With a vaccine finally available (in the States at least), we are hopeful that international borders will eventually open up and we can travel again. We still don’t know when that will be, but we know that we will make the most of our time here in Vietnam until we are able to travel more freely.

❤️ If you want to keep in touch, we are most consistent via FB @ElephantsOnTheMove.  Be sure to hit the Page Like Button!

❤️ As you can see, we haven’t written too often, but if you don’t want to miss out, leave us your email below.

❤️ For those of you looking to get to know us a little better, check out the About Us page.

Here’s looking forward to a great 2021 for everyone!